The Dukes Of Hazzard

CBS
Added to the database on January 16, 2006
Rate
(20 votes)
Cast & Characters | Broadcast History | Theme Song | DVDs | Watch Episodes | Photos | Trivia | Comments
The Dukes of Hazzard is a comedy series that aired on the CBS from 1979 to 1985 about "The Duke Boys", cousins Bo and Luke Duke, who live in a rural part of the fictional Hazzard County, Georgia with their attractive cousin Daisy and their wise old Uncle Jesse, as they race around in their customized 1969 Dodge Charger stock car, christened (The) General Lee, evading crooked county commissioner Boss Hogg and his inept county sheriff Rosco P. Coltrane, and always managing to get caught in the middle of the various escapades and incidents that often occur in the area. 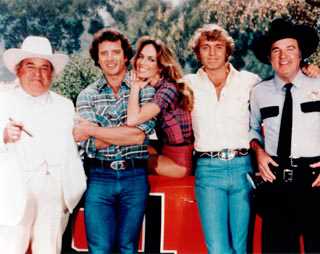 The Dukes of Hazzard was part of America's redneck fetish in the mid-to-late 1970s, otherwise evident in popular songs, movies, and television shows highlighting fast cars, truckers, citizens' band radio, moonshine, irreverent hicks, and clueless lawmen. Created by writer-producer Gy Waldron and inspired by his own 1975 bootlegging comedy, Moonrunners, Dukes milked seven seasons of material from the tale of a Deep South family of reformed whiskey-makers and their running feud with a greedy impresario and his chief lackey, a buffoonish, venal sheriff.

While every episode is a variation on the previous one, predictability is a virtue in Dukes. The series pilot, "One Armed Bandits," finds Luke and Bo, with help from their sexy cousin, Daisy (Catherine Bach), diverting slot machines (smuggled into Hazzard County by Roscoe and Boss Hogg) to sundry watering holes where they can raise money for Bo's girlfriend's charity. In "Money to Burn," Boss Hogg tries to frame Bo and Luke for robbing an armored truck, while in "Deputy Dukes," the unarmed guys are forced by Roscoe to escort a deadly prisoner from one town to another. The Dukes hit back in "Daisy's Song," investigating a scam that took Daisy for $50 and implicates, of course, Boss Hogg and Roscoe.

Just the good ol' boys,
Never meanin' no harm,
Beats all you've ever saw
Been in trouble with the law since the day they was born.
Straight'nin' the curve,
Flat'nin' the hills.
Someday the moutain might get 'em, but the law never will.
Makin' their way,
The only way they know how,
That's just a little bit more than the law will allow.
Just good ol' boys,
Wouldn't change if they could,
Fightin' the system like a true modern day Robin Hood.

Buy The Dukes Of Hazzard on DVD

Watch The Dukes of Hazzard Online

The Dukes of Hazzard Shop

The Dukes of Hazzard Photo Gallery

Bo and Luke were not allowed to have guns because they were on probation for selling moonshine so they used bows and arrows when they needed to shoot something.

The Duke boys' car, "The General Lee" that was most often seen on the Dukes of Hazzard TV show was a 1969 Dodge Charger but they often used 1968 and 1970 Chargers for close-up shots. The car was painted bright orange and had a Confederate Flag on the roof. When the Dukes honked the horn, the car played a few notes of the song, "Dixie".

Tom Wopat and John Schneider's contracts came up for renegotiation at the end of the fourth season of the Dukes of Hazzard. When NBC saw that they wouldn't be able to reach an agreement with them in time to begin filming the fifth season episodes, they hired two new actors to "fill in" as Bo and Luke's cousins. Eventually, agreements were reached and Tom and John returned to the show.

When they wanted to adjust how high the General Lee jumped, the Dukes of Hazzard stunt co-ordinators placed different quantities of cement in the trunk. That way, they could design a scene where the General Lee could be racing along at a very high speed but not jump ridiculously high when it hit a ramp!

James Best may have played a "goofball" as Sheriff Rosco P. Coltrane on the Dukes of Hazzard but in real life he attended the prestigious Juilliard school of acting and he was a black belt in Karate!

When the Dukes of Hazzard TV show premiered, John Schneider ("Smallville") was a very young eighteen-years-old.

The setting for the Dukes Of Hazzard TV show was Covington, Georgia.

Prior to the timeline of the series, Luke Duke had spent a hitch as a U.S. Marine. Also at some point in the show's past, Boss Hogg and Uncle Jesse were friends who ran moonshine together!

Male viewers loved the carefree lifestyles of Luke and Bo Duke but they also watched the show to see Daisy Duke's magnificent hot pants! They became so popular that short, shorts became commonly referred to as "Daisy Dukes"!!!

The Bar that the Dukes frequented on the Dukes of Hazzard TV show was named the "Boar's Nest".

The General Lee had a past that made it an ironic purchase for the Duke boys. It had previously been used as a getaway vehicle during a bank robbery.

Ben Jones who played Cooter Davenport on the Dukes of Hazzard was later elected the Congressman from Georgia! Then he lost the office to the "Contract with America" architect and future Speaker of the House of Representatives, Newt Gingrich.