ABC, NBC
Added to the database on December 31, 1995
Rate
(16 votes)
Cast & Characters | Broadcast History | Theme Song | DVDs | Watch Episodes | Photos | Trivia | Comments
Taxi is a sitcom that aired from 1978 to 1982 on ABC and from 1982 to 1983 on NBC that chronicled the everyday lives of a handful of New York City taxi drivers and their abusive dispatcher. Taxi won won 18 Emmy Awards, including three for "Outstanding Comedy Series".
This character-driven humane comedy from the creators of The Mary Tyler Moore Show rolled out of the garage with a full tank of gas: a lightning-in-a-bottle ensemble, smart, witty, and compassionate writing, and extraordinary characters. The Sunshine Cab Company was a much grittier workplace than the sunny WJM newsroom. Its down, but never out employees--single mother Elaine (Marilu Henner), aspiring actor Bobby (Jeff Conaway), hapless boxer Tony (Tony Danza), reptilian dispatcher Louis (Danny DeVito), naive rube John (Randall Carver), and indeterminately foreign mechanic Latka (comic iconoclast Andy Kaufman)--struggled to keep rolling along. Judd Hirsch's salt-of-the-earth cabbie Alex Rieger solved everyone's problems but his own. Christopher Lloyd was the burn-out Reverend Jim joined the cast in season two. 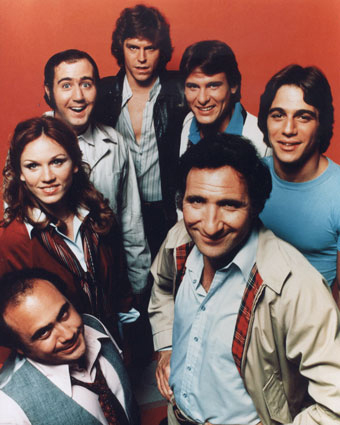 Taxi's success was due to its excellent writing, Burrows's award-winning directing using his innovative four-camera technique, and its largely unknown but talented cast. Danny DeVito's Louie DePalma soon became one of the most despised men on television--possibly the most unredeemable and worthless louse of a character ever to reside on the small screen. Andy Kaufman's foreign mechanic Latka Gravas provided over-the-top comedy within an ensemble emphasizing subtle character humor.


View all Taxi DVDs, books, merchandise and collectibles from Amazon.com

When Danny DeVito was starting out in the business, he had to have a roommate to make ends meet. His roommate was Michael Douglas.

The idea for the Taxi TV show was from an article in an issue of the New Yorker magazine about cab drivers' lives.

Due to almost identical plotlines and storylines, Taxi has often been referred to as a forerunner for the TV series, "Cheers (1982)". Danny DeVito (Louie De Palma) is married to Rhea Perlman (Carla on Cheers).

Did you ever wonder if Judd Hirsch was really that smart or if his character just seemed to be in comparison to the others? Well, in real life, Judd has a college degree in Physics!

Tony Danza's character on the Taxi TV show dreamed of being a professional fighter. In real life, Tony Danza actually was a fighter before becoming a Taxi cast member.

Andy Kaufman loved to confuse his audiences by doing something they would never suspect or couldn't understand. He appeared on the very first episode of "Saturday Night Live". He played a record with the theme song to "Mighty Mouse". He just stood there looking at the audience while it played and would only sing the words, "Here I Come To Save The Day". It was hilarious, but you couldn't figure out why. When he died, people wouldn't believe it. They thought it was just another one of his gags. Oh yeah, he was also Elvis Presley's favorite as an Elvis impersonator.

Marilu Henner dated both Tony Danza and Judd Hirsch during the show's run (One at a time).

More than 23 years after the Taxi TV show ended, its theme song would be heard on the Numb3rs TV Show at the end of episode #44 titled, "Blackout". That was a show of endearment for Judd Hirsh (Alex Rieger on Taxi) who also played "Alan Eppes" on Numb3rs!