ABC
Added to the database on October 13, 2008
Rate
(9 votes)
Cast & Characters | Broadcast History | Theme Song | DVDs | Watch Episodes | Photos | Trivia | Comments
Roseanne is a sitcom that aired on ABC 1988 until 1997 that revolved around the Conners, an Illinois working class family. The series reached #1 in the Nielsen ratings becoming the most watched television show in the United States from 1989 to 1990, and remained in the top four for six of its nine seasons, and in the top twenty for eight.
Roseanne burst onto the screen in 1988, when top-rated sitcom The Cosby Show exuded a smug Father Knows Best glossiness. In contrast, the blue-collar Conner family bickered with the offhand nastiness of real families, which didn't mean they loved each other any less. Front and center was Roseanne Barr (now known by the single name Roseanne), a former stand-up comedian who wasn't afraid to rock the boat (her fights with producers were legendary). When even the fat guys on sitcoms have svelte, hottie wives, it's hard to believe that this woman--overweight, abrasive, with a voice like a wood chipper--became top of the television heap. 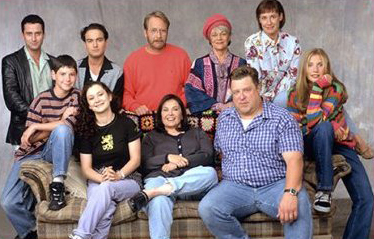 Roseanne spoke up for a kind of lower-class feminism; she didn't concern herself much with politics, but within the family she just as much in charge as her husband Dan (the ever-dependable John Goodman, Barton Fink, The Big Lebowski)--though in the final episode of the first season, she took a stand at her factory job that was half Norma Rae, half Cool Hand Luke. But most often the show turned the ordinary rituals of domestic life (putting the kids to bed, coping with visiting parents) into sharp comic scenarios. The stories were smartly hidden in a series of scenes that felt organic and unforced. The entire cast--one of the best ensembles ever, including theater veteran Laurie Metcalf (Scream 2) as Roseanne's sister Jackie; Lecy Goranson as eldest daughter Becky; Michael Fishman as youngest child D.J.; and especially Sara Gilbert (Poison Ivy, ER) as middle daughter Darlene--swiftly cultivated the mixture of comfort and tension that marks most family relationships. The result was a portrait of American family life that rang achingly, hilariously true.

At first, Roseanne Barr was going to name Johnny Galecki's character David but Johnny was already portraying a different character named David on a series titled, "Billy". In those days there was a broadcasting rule that did not allow an actor to portray more than one character on TV at a time with the same first or last name unless the actor was playing the same exact character on both series or unless it was the actor's real/stage name.

If you look at the cast list above, it appears as though there is a mistake because both Lecy Goranson and Sarah Chalke are listed for the role as Becky Conner. In actuality, they did both play that role during the eighth season when Lecy came back to the series but when she didn't return for a ninth season, Sarah came back to play Becky until the end of the series!