NBC
Added to the database on June 12, 2015
Rate
(10 votes)
Cast & Characters | Broadcast History | Theme Song | DVDs | Watch Episodes | Photos | Trivia | Comments
L.A. Law is legal drama series that ran for eight seasons on NBC from 1986 to 1994 created by Steven Bochco and Terry Louise Fisher. This critically acclaimed ensemble drama reflected the social and cultural ideologies of the 1980s and early 1990s as many of the cases featured on the show dealt with hot-topic issues of the day. The series often also reflected tensions between the wealthy senior lawyers and their less well-paid junior staff. 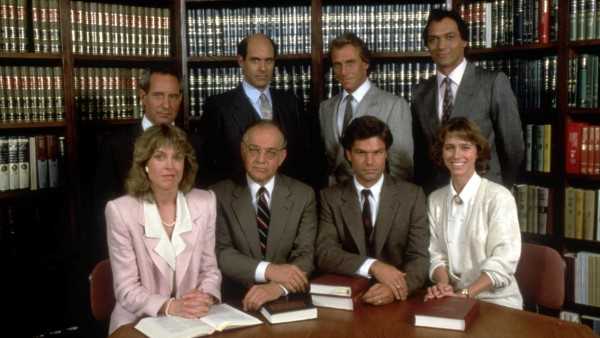 The high-powered Los Angeles law firm of McKenzie, Brackman, Chaney, and Kuzak took on cases of all types, criminal and civil, usually for high fees. Leland McKenzie was the esteemed, fatherly senior partner; Brackman, the vain, insufferable, balding partner struggling to fill his late father's formidable shoes; Kuzak, the savvy but compassionate younger partner; Van Owen, the idealistic Deputy D.A. who was Kuzak's lover and sometime courtroom opponent; Ann, another idealistic attorney; Stuart, the firm's nebbishy little tax attorney, who had a heart of gold and also had the hots for Ann; Arnie, the sleazy, womanizing divorce lawyer; Victor, the uptight young Hispanic brought into the firm to meet racial quotas, and he knew it; Abby, the unsure-of-herself young intern; Jonathan, a young black lawyer; and Roxanne, the motherly receptionist.

Plenty of office politics and sexual adventures were mixed in with the cases. Besides its soap-opera entanglements, L.A. Law emphasized outrageous situations and trendy cases. As the season's wore on, cast members departed to be replaced seamlessly by actors of equal accomplishment. Slickly produced, sharply written and consummately acted, LA Law memorably set the stylishly sophisticated tone for the deluge of legal series' which were destined to follow in its impressively substantial wake.

This show is currently unavailable to stream episodes online.

There are currently no items available for purchase.

The auto license plate in the opening credits of each L.A. Law episode had the year that the current season would end in on it. For example, the 1986/1987 season's plate numbers read "1987". The car that held the plate was a Jaguar for the first seven seasons. In the eighth season, Arnie Becker began dreaming of owning a "Bentley Continental R". He got one as a gift in episode #153 titled, "How Much Is That Bentley in the Window?" and the plate was on the Bentley for the remainder of the series.

On episode #95, "He's A Crowd", Abby Perkins (Michele Greene) and "C.J." Lamb (Amanda Donohoe) briefly but passionately kissed each other outside of a restaurant after finishing a difficult case. This was the first kiss between two women on a prime time TV series and was very contraversial at the time!

McKenzie, Brackman, and Kuzak had a fourth major partner when L.A. Law premiered. His name was Chaney and he was found dead at his desk in the very first episode!

When you watch L.A. Law, pay attention to the theme music. If it starts with a saxophone, the episode's plotline will be one of the more light-hearted ones. If the theme starts with stringed instruments, the episode will be more ominous.

The co-creator of the L.A. Law TV show, "Steven Bocho", was also a co-creater of the series, "Hill Street Blues". That series was distinctive in that most of each episodes stories took place during one day. L.A. Law also used mostly one-day stories.

L.A. Law's other co-creator, "Terry Louise Fisher", had been a deputy district attorney and an entertainment attorney before becoming a producer and a TV writer. Besides producing L.A. Law, she also produced and wrote for the series, "Cagney and Lacey" and "Hooperman", among others. Terry would often get nasty letters from Attorneys about how she characterized them or about how some legal aspect of the show was incorrect. Once in a moment of anger, she wrote a response that is rumored to never have been actually sent to anyone. It went, "Dear So-and-so: If I were a good lawyer, I'd still be practicing law. Instead, I'm stuck in Hollywood, making 10 times as much money. I hope you are as conscientious about your clients as you are about our show. Thank for your writing"!

William M. Finkelstein took on the job of executive producer for L.A. Law's final season after his series titled, "Civil Wars" was cancelled in early 1993. He brought two characters from that legal series to join the L.A. Law team (Eli Levinson played by Alan Rosenberg and Denise Ianello played by Debi Mazar).

The L.A. Law TV show's cast was parodied on the October 1987 issue of Mad Magazine. Steven Bochco liked it so much that he had the real cast get into the same positions as their parodies were in and took a photo to send to Mad Magazine. They printed that photo too in a future issue!