CBS
Added to the database on October 18, 1999
Rate
(35 votes)
Cast & Characters | Broadcast History | Theme Song | DVDs | Watch Episodes | Photos | Trivia | Comments
The Andy Griffith Show is a sitcom that aired on CBS from 1960 until 1968 about a widowed sheriff in the fictional small community of Mayberry, North Carolina. His life is complicated by an inept but well-meaning deputy, Barney Fife (Don Knotts), a spinster aunt and housekeeper, Aunt Bee (Frances Bavier), and a young son, Opie. Local ne'er-do-wells, bumbling pals, and temperamental girlfriends further complicate his life. 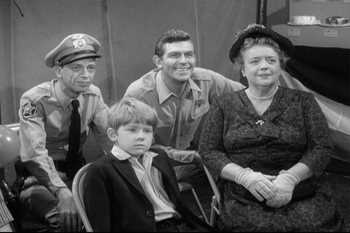 Since its debut in 1960, The Andy Griffith Show has been a viewer favorite thanks to its folksy, nostalgic charm and memorable cast, both of which shine in this set featuring the series' debut season. Originally spun off from an episode of Make Room for Daddy (both series shared producers Sheldon Leonard and Danny Thomas), The Andy Griffith Show centered around the lives of small-town sheriff Andy Taylor (the marvelously dry Griffith), his son Opie (Ron Howard), cousin and deputy Barney Fife (multiple Emmy winner Don Knotts), and the other gentle eccentrics of Mayberry (which was based on Griffith's real hometown). But while other "rural" programs poked fun at its characters (The Real McCoys, The Beverly Hillbillies), The Andy Griffith Show never stooped to stereotypes, preferring instead to draw its humor from the fine writing and cast, which counted Frances Bavier as Aunt Bee, Howard McNear as Floyd the Barber, and Hal Campbell as Mayberry's benevolent drunk, Otis.

"The Fishing Hole" by Earle Hagen

The Andy Griffith Show was a spin-off of the "Make Room For Daddy TV show" (aka: "The Danny Thomas Show"). Andy Griffith guest starred as Sheriff Andy Taylor on one episode! It was obviously a marketing tool by having the main character for a new series appear on a highly successful series. Danny Thomas' production company produced both series. That episode is considered the be the pilot for the Andy Griffith Show.

Andy Taylor's wife and Opie's mom's fate was mentioned in the pilot. Andy said that his wife had died when Opie was "the least little speck of a baby". The only other time she was mentioned was on the episode, "Wedding Bells for Aunt Bee" when Andy explained to Opie how he loved Opie's mom just like Aunt Bee loved her fiance. Other than that, she was never mentioned again and their were absolutely no photos of her and no grave site is ever visited or mentioned. Her parents (Opie's grandparents) never appear and neither do any maternal aunts or uncles.

Andy Griffith got his first major part on TV on an episode of "The United States Steel Hour" titled, "No Time For Sergeants". Andy played a dim-witted but loveable soldier who caused never-ending problems for his Sergeant. It was a ratings hit and five years later in 1958 Andy agreed to reprise his role in a movie based on that episode! Six years after the movie hit theaters, the Andy Griffith Show generated a "spinoff TV series" with the same storyline titled, "Gomer Pyle U.S.M.C." which also ran for five seasons and 150 episodes!

Don Knots played such goofy characters on the Andy Griffith Show and in the movies that many people believed he was like that in real life. In actuality, he was so good at playing those roles that he won five Emmy Awards for his role as Barney Fife!

You may have thought that Barney Fife was just Andy Taylor's dim-witted deputy but he was also Andy's cousin.


« All In The Family The Avengers »