CBS
Added to the database on October 17, 2008
Rate
(14 votes)
Cast & Characters | Broadcast History | Theme Song | DVDs | Watch Episodes | Photos | Trivia | Comments
The Waltons is a period drama series that aired on CBS from 1972 to 1981 that is based on the book Spencer's Mountain and a 1963 film of the same name. The show is centered on a family in a rural Virginia community during the Great Depression and World War II.
The Waltons' nearly 10-year run on network television grew out of the popular, 1971 made-for-TV movie The Homecoming, which was derived from a Depression-era, rustic setting ("Walton's Mountain"), and characters based on Earl Hamner Jr.'s autobiographical novel Spencer's Mountain--itself the source for a very nice 1963 feature film starring Henry Fonda and Maureen O'Hara. That's a lot of entertainment sprouting from Hamner's prose. But something about his seminal story of family values, rugged independence, and big dreams amidst a hardscrabble existence captured the hearts of American audiences, many of whom personally recalled severe economic adversity in the 1930s. 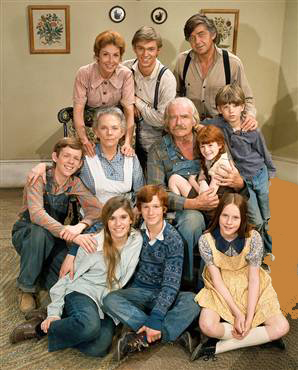 The Waltons initial episodes from the series built on the strengths of the Homecoming pilot, which introduced the extended Walton clan led by a strong-willed mill owner, John (Andrew Duggan), and his equally resolute wife, Olivia (Patricia Neal). The Waltons recast those key roles (as well as a few others) with Ralph Waite and Michael Learned (yup, a female), but Richard Thomas carried over as oldest child John-Boy Walton, an aspiring writer whose cusp-of-manhood view informs the series. Will Geer (Seconds) replaced Edgar Bergen as Grandpa Walton, Ellen Corby remained as Grandma, and John and Olivia's large brood (seven kids in all) were filled out by largely unknown, young actors. The episodes, still delightful and touching, strong on production values and unusually tight and polished for primetime drama, tended to focus on creator Hamner's pet themes of self-sacrifice and heroic effort when the going got tough.

The Waltons on DVD


View all Waltons DVDs, books, merchandise and collectibles from Amazon.com

Walton's mountain was set in the Blue Ridge Mountains in Jefferson County, Virginia.

The TV show was extremely popular with the exception of large metropolitan areas like New York City and Los Angeles. Audiences there just couldn't identify with the characters.

The Waltons was originally scheduled in the same time slot as two very popular shows! It was risky for CBS to do that but it payed off big time! "The Mod Squad" (ABC) only lasted one season and "The Flip Wilson Show" (NBC) only survived two seasons.

It's fortunate that Richard Thomas had such "boyish" looks at the time. "Michael Learned" who played his mother "Olivia Walton" was only 11 years older than Richard Thomas!

By the sixth season, the Waltons were coming out of the Depression but into perhaps worse time as World War II began.

Although the regular episodes of the Waltons TV show, the 1993 TV movie, the 1995 TV movie, and the 1997 TV movie all aired on CBS, the two 1982 TV movies aired on NBC (see further information below).

The series was based upon the life of the "Hamner" family (written by Earl Hamner, Jr.). There was a movie made about them in 1963 called "Spencer's Mountain" which inspired the TV show. Earl Hamner, Jr. wrote the story from his real-life perspective as a child in a large family during the depression who wanted to grow up to be an author (The John Boy character). Earl also was the Narrator (voice) on the TV show.

Near the end of the Waltons TV show, John Walton Sr. sold the family's lumber mill to his son Ben and moved to Arizona where Olivia Walton was recovering from a relapse of Tuberculosis.