Leave It To Beaver

CBS, ABC
Added to the database on August 27, 1999
Rate
(16 votes)
Cast & Characters | Broadcast History | Theme Song | DVDs | Watch Episodes | Photos | Trivia | Comments
Leave It to Beaver is a sitcom about an inquisitive but often naïve boy named Theodore "The Beaver" Cleaver and his adventures at home, in school, and around his suburban neighborhood. The show also starred Barbara Billingsley and Hugh Beaumont as Beaver's parents, June and Ward Cleaver, and Tony Dow as Beaver's brother Wally. The show has attained an iconic status in the United States, with the Cleavers exemplifying the idealized suburban family of the mid-20th century. 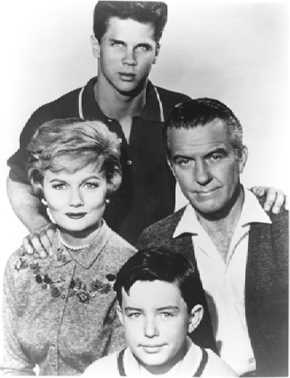 211 Pine Street, Mayfield, the residence of the Cleaver family: Ward, an accountant; his wife June; and their children, Wally and Theodore (Beaver). Stories relate to the experiences of the two brothers. Beaver Cleaver was 7 when the series began, and Wally was 12. Beaver was a typically rambunctious youth, more interested in pet frogs than in girls, but Wally, just entering his teens, was beginning to discover other things in life.

The boys' parents were one of those nice, middle-class couples so often seen in this kind of program. Larry, Whitey, and Gilbert (among others) were Beaver's pals, Eddie and Lumpy were Wally's buddies. Eddie Haskell was one of the more memorable characters, unctuous and oily to adults, but a bully to little kids.

Miss Canfield and Miss Landers were Beaver's school teachers. As the years passed and Beaver got older, the stories naturally moved away from the little-boy premise until, in the final season, Beaver was about to enter his teens and Wally was ready for college.

Buy Leave It To Beaver On DVD

Leave It To Beaver Photo Gallery

Leave It To Beaver Trivia

The Cleavers lived in the town of Mayfield and the father, Ward Cleaver, worked as an accountant. They owned two homes during the series' run. The first was located at 485 Mapleton Drive. The second home was at 211 Pine Street.

The reason stated for giving Theodore the nickname, "Beaver" was that when Wally was learning to speak, he couldn't pronounce Theodore.

The pilot episode of Leave It To Beaver was lost for many years but was found in 1987. Jerry Mathers and Barbara Billingsley were both in the pilot, however, Ward Cleaver was played by Casey Adams and Wally was played by Paul Sullivan. The was no Eddie Haskell in the pilot, however, there was a similar character whose name was Frankie played by Harry Shearer. You may remember Harry as a regular on "Saturday Night Live" in the 1979/80 and 1984/85 seasons.

Ken Osmond (Eddie Haskell) joined the Los Angeles Police Department as an officer after leaving the series. He was shot three times in the line of duty. He eventually retired from the force. Ken guest-starred on the very first episode of the TV show, "Lassie (1954)". Twelve and one-half years later, he guest-starred on the series again on episode #435, "A Matter Of Seconds".

If you don't remember Richard Deacon as Lumpy's dad on the show, perhaps you'll find it easier to remember him as the producer (Mel Cooley) of the ficticious "Alan Brady Show" on the series, "The Dick Van Dyke Show (1961)" or as Sheriff Masters on the series, "B.J. and the Bear (1979)".

The day (October 4, 1957) that the first episode of the show aired, just happens to be the same day that the Soviet Union launched the first man-made object (Sputnik) into space.