NBC
Added to the database on September 17, 2008
Rate
(16 votes)
Cast & Characters | Broadcast History | Theme Song | DVDs | Watch Episodes | Photos | Trivia | Comments
Sanford and Son is a sitcom that aired on NBC from 1972 to 1977 that starred Redd Foxx as Fred G. Sanford, a 65-year-old widower and junk dealer living in the Watts neighborhood of South Central Los Angeles, alongside Demond Wilson as his 30-year-old son, Lamont Sanford.
An iconic 70s sitcom opening with the classic theme by Quincy Jones, Sanford and Son was the American version of the British sitcom Steptoe and Son. Red Foxx played the grouchy but lovable junkman Fred Sanford, who constantly threatened heart attacks whenever things did not go his way. Foxx was supported by an equally hilarious cast, including his long suffering son Lamont (Demond Wilson), arch-nemesis and sister-in-law Ester (LaWanda Page), and the goat-owning Puerto Rican Julio (Gregory Sierra). 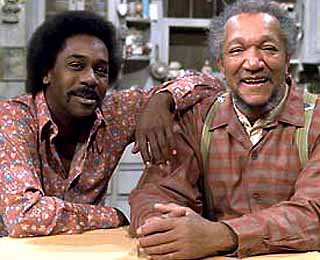 Sanford and Son on DVD

Sanford and son was inspired by the hit British sitcom, "Steptoe and Son".

Sanford and Son began as a mid-season replacement series. It replaced "The D.A. TV Show".

Norman Lear was the executive producer for Sanford and Son. Lear also produced several other series including "Hot L Baltimore", "All in the Family", "The Jeffersons", "Maude", "Mary Hartman, Mary Hartman", and "One Day at a Time". Lear flew more than 50 missions over Italy during World War II as a radio operator on a Boeing B17 Bomber! For that duty, Lear received the Air Medal with four oak leaf clusters! His career in showbiz began as a TV writer on the "Ford Star Review" in 1951!

Fred Sanford's wife "Elizabeth" had been dead for some 20 years before the timeline of the series. Whenever someone would get down on Fred for some stupid thing he'd done, Fred would use the same ploy to try to get them to feel sorry for him and leave him alone. He'd fake a heart attack by grabbing his chest and looking up to the sky while saying, "I'm comin' 'Lizabeth".

While it typically appeared on Sanford and Son that Fred owned the junk business and Lamont only worked for him, they actually each owned half. Fred just treated Lamont like an employee instead of a partner. Occasionally, however, Lamont would "put his foot down" and insist that his dad do some work!

Redd Foxx wanted to quit the series in 1977 to move to ABC and star in a variety show so Sanford and Sons ended. Demond Wilson was to continue his role as Lamont Sanford but he pulled out of the deal when NBC offered him a salary that did not reflect what he felt he was worth as the character that would really be carrying the show! NBC had already considered developing a spin-off series titled, "The Sanford Arms" but that series was also expected to star Wilson. So NBC decided to end Sanford and Son and develop The Sanford Arms with several of the Sanford and Son's secondary characters in new starring roles. LaWanda Page stayed on as Aunt Esther as did Whitman Mayo as Grady Wilson but the winning rough chemistry between Fred and Lamont was missing and viewers left in droves! Eight episodes were produced but after only four had been broadcast when NBC pulled it off the air.

Redd Foxx began his career as a stand-up comedian. He specialized in humor that was considered too "dirty" for white audiences (my how things do change). At that time he performed mainly in clubs catering to black audiences. In the 1960s, Redd toned down the language and subject matter of his act a bit and adult white audiences became more tolerant. He appeared on numerous variety shows including Ed Sullivan's "Toast of the Town" and "The Red Skelton Show". Due to those appearances, he became well known by audiences of all races and that led to the offer of his starring role on Sanford and Son.

In 1980, there was an attempt to bring back the series with a storyline as close as possible to that of the original Sanford and Son. This new second spin-off series was simply titled, "Sanford". Redd Foxx returned as Fred Sanford with an otherwise totally new cast. Lamont had gone off to work in Alaska on the oil pipeline and Fred got one of Lamont's friends to help him run the business (and presumably provide the old rough chemistry between Fred and his "son" from the original series). Fred also gained a love interest in the form of a rich widow whose relatives hated the idea of her dating a crotchity old junk man. That series actually lasted two seasons for 26 episodes.