CBS
Added to the database on May 18, 2009
Rate
(28 votes)
Cast & Characters | Broadcast History | Theme Song | DVDs | Watch Episodes | Photos | Trivia | Comments
The Beverly Hillbillies is a sitcom that aired for nine seasons on CBS from 1962 to 1971 about The Clampetts that strike oil and move from hillbilly country to Beverly Hills, California.
From the creative genius of TV pioneer Paul Henning (The George Burns & Gracie Allen Show, Love That Bob, Petticoat Junction), comes the story of poor Ozark mountaineer Jed Clampett and his kin, striking it rich with oil and headin' for Beverly Hills, California. Join the feistiest Granny of them all, wise Uncle Jed, his critter-loving daughter Elly May and love-crazy Cousin Jethro in their unrefined, legendary quest for an idyllic West Coast existence. Welllll, Doggies! 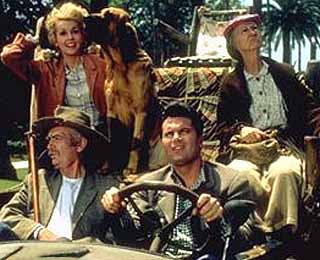 This series follows the Clampett family from the Ozarks to posh Beverly Hills after they strick oil and become millionaires. Banker Mr. Drysdale tries to keep them from foolishly spending their newfound wealth, and he also tries to "civilize" them - usually succeeding in making a fool of himself.

{videobox}/media/video/beverlyhillbillies.mp4{/videobox}
"The Ballad of Jed Clampett" by Paul Henning

The Beverly Hillbillies On DVD

Nancy Kulp originally spelled her last name with a "C". She changed it to avoid any potential confusion with "I Spy" star Robert Culp.

The show was filmed in black & white for the first three seasons and in color thereafter.

Max Baer Jr. (Jethro) was no idiot in real life. In fact, he had a degree in Business Administration. Also, his father, Max Baer Sr. was at one time the heavyweight boxing champion of the world!

At the beginning of the series it was stated that Jed Clampett got $25 Million for the oil on his property. By the end of the series his net worth was mentioned as being $95 Million!

You may have known that Bea Benaderet (Cousin Pearl) also appeared on "Green Acres (1965)" and "Petticoat Junction (1963)" but she also was on the "George Burns & Gracie Allen Show (1950)" as early as 1950!. Even before that she was a star on the radio with Lucille Ball on "My Favorite Husband", on "Fibber McGee & Molly", the "Jack Benny Program" and many others. She also did many cartoon voices ... the best-known being "Betty Rubble" on "The Flintstones (1960)".

"The Ballad of Jed Clampett" climbed to #44 on the hit parade chart in the first season (1962). Not bad for a TV show theme song!

The Beverly Hillbillies was the #1 show (highest rating) during 1962 & 1963! In fact, it went to the #1 position within its first three weeks on the air ... faster than any other series ever had! Episodes #10-17 were the most-watched episodes of all time, probably because of the assasination of President John Fitzgerald Kennedy on November 22, 1963. The nation needed a reason to laugh again after that terrible tragedy!