NBC
Added to the database on October 8, 2008
Rate
(6 votes)
Cast & Characters | Broadcast History | Theme Song | DVDs | Watch Episodes | Photos | Trivia | Comments
Miami Vice was a crime drama series that ran on NBC for five seasons from 1984 to 1989. The series starred Don Johnson and Philip Michael Thomas as James "Sonny" Crockett and Ricardo "Rico" Tubbs respectively, two Metro-Dade Police Department detectives working undercover in Miami.
This series is largely remembered for the stylish clothes Detectives Sonny Crockett and Ricardo Tubbs wore, the soundtrack, and its distinct visuals. But beneath the veneer is a surprisingly dark cop show. The cocaine boom of the 1980s framed many stories about drugs and murder, with Crockett and Tubbs often resorting to violence in the course of their work. 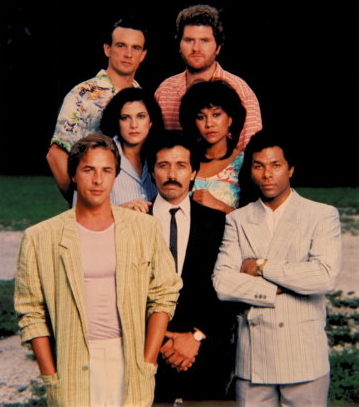 Miami Vice made stars out of Don Johnson, Philip Michael Thomas, and Edward James Olmos, who won an Emmy as the intense, taciturn Lt. Castillo (watching him bust some martial arts moves in "Golden Triangle" is like Yoda cutting lose in Attack of the Clones), but the first season also offers time-capsule glimpses of actors on the cusp of stardom, including a pre-L.A. Law Jimmy Smits in the pilot, a pre-Crime Story Dennis Farina in "One-Eyed Jack," and a pre-Moonlighting Bruce Willis in "No Exit." Miami Vice put a neon sheen on cop-show convention. Its fashion sense (pastel suits, no belt, no socks), and the brilliantly employed freeze frames are still arresting.
To hear the opening beats of Jan Hammer's percussive, propulsive Miami Vice theme is to be instantly transported back to 1984. But this groundbreaking series, with its cinematic sensibility, cool clothes, and killer soundtrack is no mere blast from the past. It still rocks.

Many of the television critics who praised the show in its first season made reference to the series' music, a combination of songs by artists like Glenn Frey, Phil Collins and Kate Bush and original music by Jan Hammer, the former keyboardist for the Mahavishnu Orchestra. Frey and Collins made cameo appearances in some episodes of the series.

Crockett's Ferrari Daytona was actually a modified Corvette. Ferrari executives were so upset that this ersatz Ferrari was gaining such popularity that they offered to provide the series with their new flagship car, the Testarossa.

Sonny's undercover alias was "Sonny Burnett." Ricardo's became "Rico Cooper" except for the pilot episode, when his alias was "Teddy Prentiss," and some early first season episodes when he used "Richard Taylor."

All technical advisors for the show served with the real-life Miami Vice unit, and required that the cast members first pass the Florida Department of Law Enforcement firearms test before they could handle weapons on the set.