ABC
Added to the database on October 3, 2008
Rate
(12 votes)
Cast & Characters | Broadcast History | Theme Song | DVDs | Watch Episodes | Photos | Trivia | Comments
The Greatest American Hero is a comedy-drama series that aired for three seasons from 1981 to 1983 on ABC about flying crime fighter.
Believe it or not, he’s walking on air! William Katt is back as reluctant flying crime fighter Ralph Hinkley, who would know exactly how to use the red superpower suit given to him by aliens if he hadn’t lost its instruction manual. In this season, Ralph pitches in the World Series, prevents World War III, suffers amnesia, joins the circus, battles bad bikers, voodoo vengeance, a fast-food mascot and much more, all with the help of his attorney girlfriend Pam Davidson (Connie Selleca) and FBI agent Bill Maxwell (Robert Culp). Who could it be? Believe it or not, he’s THE GREATEST AMERICAN HERO! 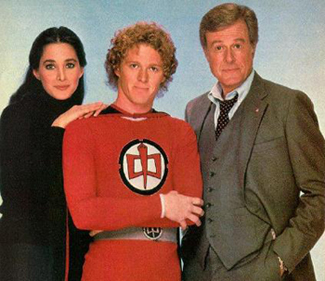 {videobox}/media/video/greatestamericanhero.mp4{/videobox}
"The Greatest American Hero (Believe it Or Not)," by Mike Post and Stephen Geyer, sung by Joey Scarbury

The theme song for the series became a major hit on the charts during the summer of 1981.

The owners of the Superman copyright threatened to sue citing similarities in the suits and of the superpowers.

Connie Sellecca starred on another TV series before, the Greatest American Hero titled, "Flying High". Before the final season of the Greatest American Hero began, Connie appeared in a TV movie titled, "Hotel". She went on to re-create the role on a Hotel TV Show. The first episode of that series aired a measley 6 1/2 months after the final episode of the Greatest American Hero so Connie didn't have any substantial gap in her resumé! Before becoming an actress, Connie had a career modelling lingerie. The actors and crews that Connie works with know her as an expert practical joker. When she and Gil Gerard were married he would come home to find Connie on the floor, seemingly dead, with a huge pool of fake blood all around! That happened so often that Gil started rating how good her attempts were compared to previous ones!

On March 30, 1981, a man named John Hinckley attempted to assasinate President Ronald Reagan. Fearing public disgust over the similarity in last names (Hinkley & Hinckley), scripts were quickly rewritten to refer to the hero of the series as simply, "Mr. H" and sometimes even "Mr. Hanley". Eventually, however, things cooled off and his name was changed back to Hinkley.

Robert Culp's grandfather inspired him in his role as Bill Maxwell. He had also written an episode of his series, "I Spy" where he developed a character (Uncle Harry) who was also inspired by his grandfather.

Robert Culp wrote several of the Greatest American Hero scripts. He had previously written scripts for his first series "Trackdown (1957)" and also for "I Spy (1965)". He even won an Emmy for one of the "I Spy" scripts!

Thirteen years before appearing as an FBI agent in "The Greatest American Hero", Robert Culp played the role of a U.S. secret agent on "I Spy". Actually, the rugged schedule of shooting "I Spy" caused him on many occasions to say that he didn't even want to see scripts for TV pilots. Fortunately, a friend convinced him to change his mind for "The Greatest American Hero".