CBS
Added to the database on September 16, 2008
Rate
(21 votes)
Cast & Characters | Broadcast History | Theme Song | DVDs | Watch Episodes | Photos | Trivia | Comments
The Mary Tyler Moore Show is a sitcom that aired on CBS from 1970 to 1977. The program was a television breakthrough, with the first never-married, independent career woman as the central character: "As Mary Richards, a single woman in her thirties, Moore presented a character different from other single TV women of the time. She was not widowed or divorced or seeking a man to support her.
Mary Richards is a thirty-something single woman who settles in Minneapolis after breaking up with a boyfriend. She lands a job as an associate producer of the evening news at WJM-TV, which happens to be the area's lowest-rated station. Her boss, Lou Grant, hates her spunk but often looks to her to solve newsroom (or even personal) problems. Mary's other coworkers include news writer Murray Slaughter, egomaniacal anchorman Ted Baxter and "Happy Homemaker" Sue Ann Nivens (Betty White). Mary's home is a modest studio apartment -- and her upstairs neighbor, Rhoda Morgenstern, quickly becomes a good friend. Later in the series, Mary moves to a plush high-rise apartment before leaving Minneapolis and WJM for good. 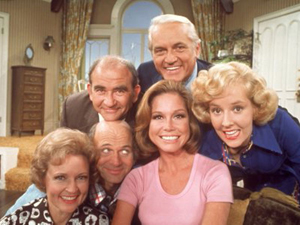 {videobox}/media/video/marytylermooreshow.mp4{/videobox}
"Love Is All Around" by Paul Williams

It's a bit comical that "Lou Grant" became a successful, five-year series of its own. CBS was very skeptical about the Lou Grant character in the beginning. A three-minute long "pilot" titled, "Love is all Around" was produced solely to sell that character to the network! Apparently it worked!

CBS had a difficult time casting the role of "Sue Ann Nivens". One of the producers said that they should find "someone like Betty White". Eventually, somebody suggested that they simply call Betty White ("The Golden Girls") and ask her if she wanted the role. She accepted and joined the cast of the Mary Tyler Moore Show!

Mary Richard's boss, "Lou Grant" ultimately was promoted to Executive Producer of the news and Mary got his job as producer.

Every member of the WJM news team won a Teddy Award except Murray Slaughter. That may have jinxed things because Gavin MacLeod ("The Love Boat") who played Murray was the only one who didn't get an Emmy nomination in real-life!

Murray was the only member of the WJM news staff who never won a Teddy. Coincidentally, Gavin MacLeod, who played Murray, was the only regular cast member on the Mary Tyler Moore show to never be nominated for an Emmy.

Believe it or not, CBS decided that they had to explain why a beautiful woman in her 30s like Mary Richards was not married! They had originally decided to say she was divorced but Mary Tyler Moore was still so identified with her role as Laura Petrie on the "Dick Van Dyke Show" that CBS was afraid the audience would think the character had divorced lovable "Rob Petrie" and they wouldn't like her for it! So instead of making her a divorcee, they said she had been in a long term engagment that didn't work out!

Mary Tyler Moore also wore a wig during season one of the Mary Tyler Moore show in order to make her look less like Laura Petrie. The concern over being identified with her former role had apparently diminished by the second season as she dumped the wig.

In an effort to increase the ratings of WJM-TV's news department, new owners canned all of the employees of the news department except Ted Baxter during the Mary Tyler Moore show's last episode. That's ironic since Ted was the primary cause for the terrible ratings! It was really a great ending for the Mary Tyler Moore show because not only were the characters splitting up their working relationships, so were the actors! It made it easy for the actors to appear sad because they really were!