CBS
Added to the database on November 23, 2009
Rate
(9 votes)
Cast & Characters | Broadcast History | Theme Song | DVDs | Watch Episodes | Photos | Trivia | Comments
Maude is a sitcom starring Bea Artur that that aired on CBS network from 1972 until 1978.
Sitcoms come and go. And then there's Maude, the groundbreaking Norman Lear comedy that was both wildly popular and just as wildly controversial in its 1970s heyday. The show revolves around Maude Findlay, a very outspoken middle-class woman who wears her liberal politics on her sleeve and shares her home in suburban Tuckahoe, N.Y., with fourth husband Walter, her divorced daughter Carol and Carol's adolescent son, Phillip. Walter and Maude's best friends are next-door neighbors Dr. Arthur and Vivian Harmon. Among the domestic help that Maude helps liberate during the run of the show are Florida Evans and Mrs. Nell Naugatuck. 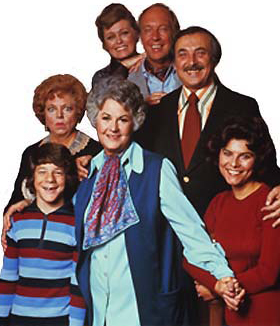 The Maude TV show was a spin-off series of "All In The Family" where Maude was Edith Bunker's cousin. She drove Archie Bunker nuts with her far left-wing liberal political views which were in total opposition to Archie's views. Maude's "stabbing" attacks and "no nonsense" talk made her the perfect character for a series of her own.

On Maude, the character, "Doctor Arthur Harmon" kind of took the place of Archie Bunker as the guy who has the exact opposite political views as Maude and, therefore, gets regularly abused by Maude's attacks.

The storylines took advantage of Maude's "in your face" attitude to cover serious and controversial issues as did Norman Lear's other shows "All In The Family" "One Day At a Time" and "Good Times".

Maude was so hard to get along with, you can imagine what it might have been like to work for her. During the six seasons of the Maude TV show, Maude and her "coarse" personality went through three maids!

Maude was nominated for 6 Emmy Awards during its time on the air and in 1977, Beatrice Arthur won for "Outstanding Lead Actress in a Comedy Series". The series was also nominated for 7 Golden Globe Awards. Again, it only won one of those nominations in 1976 when Hermione Baddeley won in the "Best Supporting Actress - Television" category.

When Norman Lear wrote the series, he based Maude on the woman he was then married to, "Frances Lear".

Bea Arthur once said in an interview that she actually got her start in comedy when audiences laughed during her lounge singing performances because she was so tall and had such a deep voice. Her nightclub manager suggested that she drop the singing career and take up comedy instead.

If you think Bea Arthur looks and acts like a tough gal, you're right! She even spent a hitch in the United States Marine Corps.

Maude aired an extremely controversial episode on November 21, 1972 (Maude's Dilemma - Part 2) when Maude decided to have an abortion. At that time, abortion was a state's rights issue and was only legal in certain parts of the nation. Just two months later, on January 22, 1973, the U.S. Supreme Court ruled that women nationwide should have the right to choose whether or not to terminate their pregnancies in the landmark case, "Roe Vs. Wade".

Both "Maude" and "The Golden Girls" were canceled when Bea Arthur decided to leave the casts when she got tired of playing the same old characters.

Towards the end of the series, Maude was slipping in the ratings so CBS decided to make a major change in the storyline. In the final three episodes of Maude (Maude's Big Move - Parts 1-3), Maude ran for political office and became a congresswoman. It ended out not mattering what would happen to ratings, however, because Bea Arthur decided to leave the series regardless of the outcome.