NBC
Added to the database on October 1, 2008
Rate
(14 votes)
Cast & Characters | Broadcast History | Theme Song | DVDs | Watch Episodes | Photos | Trivia | Comments
The Golden Girls is a sitcom that aired on NBC from 1985 until 1992 that centers on four older women sharing a home in Miami, Florida.
Launched during the neon-lit 1980s, The Golden Girls shed light on a side of Miami ignored by Miami Vice. In other words, no drugs, no murder--just four women of "a certain age," spending their golden years in the sun. Like the theme, "Thank You for Being a Friend," the long-running sitcom was about friendship (not crime). As for the "girls," they were tart-tongued Dorothy (Beatrice Arthur), former farm girl Rose (Betty White), Southern belle Blanche (Rue McClanahan), and Dorothy's salty Sicilian mother Sophia (Estelle Getty). All were widows, with the exception of the divorced Dorothy. Created by Emmy-winning producer Susan Harris (Soap), The Golden Girls re-ignited the careers of 1970s TV veterans Arthur (All in the Family, Maude) and White (The Mary Tyler Moore Show). At the same time, it made stars of McClanahan (who co-starred on Maude), by playing a comic version of A Streetcar Named Desire's Blanche Dubois, and the scene-stealing Getty, made to look older than her actual age (she and Arthur were born the same year). 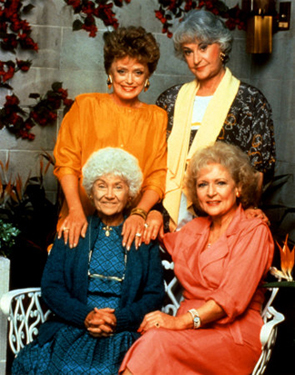 The Golden Girls ran for seven seasons and spawned spin-off The Golden Palace (without Arthur) and a British version called The Brighton Belles. By the end of its run in 1992, it had garnered numerous awards, including two Emmys for best comedy series. In addition, each of the four actresses received a well-deserved Emmy for her efforts.

{videobox}/media/video/goldengirls.mp4{/videobox}
"Thank You for Being a Friend," by Andrew Gold, sung by Cynthia Fee

The Golden Girls on DVD

The Golden Girls was so popular that it "spun-off" two other series titled, "Empty Nest" and "The Golden Palace".

The Golden Girls was in the top 10 in the Nielsen ratings for each of its seven seasons! It was seen by audiences in 60 countries around the world!

Michael Eisner, CEO of Disney/Touchstone who produced the Golden Girls, was not totally sold on the original pilot script. He wondered how big the audience was for a series about three old ladies living together. When the character Sophia was added, he was sold! Eisner felt that a daughter dealing with her mom would appeal to a wider audience and he was right!

The pilot script also included a gay male who cooked, cleaned, etc. for the Golden Girls but that role was deleted when Sophia was added.

Estelle Getty played Beatrice Arthur's mother on The Golden Girls but, in real-life, Arthur is seventy-three days older than Getty!

Betty White was originally hired to play the role of Blanche on The Golden Girls and Rue McClanahan was hired to play the role of Rose. Betty White was best known at that time for her role as the extremely dynamic "Sue Ann Nivens" on the "Mary Tyler Moore Show". Rue was best known from her role as the timid and subdued "Vivian" on the series "Maude". Both Betty and Rue were concerned about becoming typecast and NBC was afraid that audiences might confuse their characters with their former ones so they switched roles to play characters that were nearly exact opposites from their former ones.

Bea Arthur, Rue McClanahan, Betty White, and Estelle Getty all won Emmy Awards for their roles on The Golden Girls!