The Fresh Prince Of Bel-Air

NBC
Added to the database on August 28, 2009
Rate
(14 votes)
Cast & Characters | Broadcast History | Theme Song | DVDs | Watch Episodes | Photos | Trivia | Comments
The Fresh Prince of Bel-Air is a sitcom that aired on NBC from 1990 to 1996 that stars Will Smith as a fictionalized version of himself, a street-smart teenager from West Philadelphia who is sent to move in with his aunt and uncle in their wealthy Bel Air mansion, where his lifestyle often clashes with that of his relatives.
Before he became a mega-movie star, hip hop artist Will Smith starred in this quintessential '90s sitcom. Will Smith plays a street-smart teenager who grew up on the mean streets of West Philadelphia. After he gets into some trouble, his mother sends him to Bel-Air to live with Will's rich uncle. Will's foils included his stern Uncle Philip, preppy Carlton, and airhead Hilary. Though Smith's rapid-fire wisecracks were the show's main attraction, Will's new family sometimes got the last laugh. 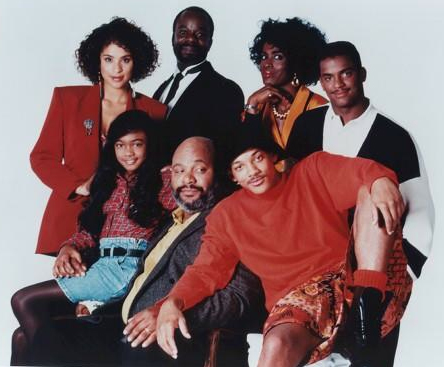 {videobox}/media/video/freshprinceofbelair.mp4{/videobox}
Theme sung by Will Smith and composed by Quincy Jones.


The Fresh Prince Of Bel-Air On DVD

Fresh Prince was incorporated into the title of the series because that's what Will Smith used as his stage name when he was performing in the 1980s as a rap artist.

The crazy "Carlton Dance" that you saw on the Fresh Prince of Bel-Air TV show was a parody of a dance that Courteney Cox ("Misfits of Science" and "Friends") performed on the 1984 music video by Bruce Springsteen titled, "Dancing in the Dark". It may appear that Will Smith's character on the Fresh Prince of Bel-Air has the same name as he does in real life but that's not exactly true. His real first name is "Willard" and on the show it's "William".

The Fresh Prince of Bel-Air was canceled at the end of the fourth season when Will returned to Philadelphia. Ratings had become not horrible but not very good either. The fourth and fifth seasons happened for a couple of reasons. First, both Will Smith and NBC received tons of mail begging them to keep producing the Fresh Prince of Bel-Air. Secondly, the NBC affiliates were repeating the old episodes and those repeats were getting pretty terrific ratings (for repeats, that is). Most of the station managers were worried that with only 99 episodes, audiences would soon tire of the same old episodes over and over again so many of them offered to pay a much higher fee than usual for the rights to run the repeats if NBC would produce 50 more episodes!

Janet Hubert-Whitten left the Fresh Prince of Bel-Air after finishing the third season. Daphne Maxwell Reid took over her role as Vivian Banks for the final three seasons. Apparently Janet, Will Smith, and the producers were not getting along well. She was offered a contract for the fourth season but she wouldn't sign.

Sherman Hemsley appeared on five episodes of the Fresh Prince of Bel-Air. On episodes #55, 56, and 59 he appeared as "Judge Carl Robertson". Then, a few years later, he showed up on episode #116 and 148 as George Jefferson, his starring role on "The Jeffersons TV Show".

On episode #142, "Hare Today" it's disclosed that Geoffrey Butler's middle name is "Barbara".