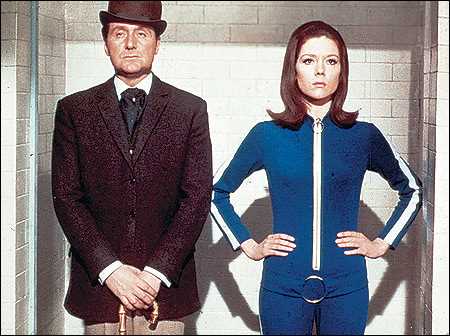 Shown in Great Britain for more than five years (debuting in 1961) before it caught on in America, The Avengers is a secret-agent thriller that almost bests James Bond. Jonathan Steed - an urbane, proper gentleman spy - and adventurous citizen Emma Peel repeatedly saved the world from diabolical schemes plotted by equally diabolical evil-doers (among them robots and man-eating monsters).Emma Peel, in her leather boots and mini-skirts, is now considered one of the most liberated women on 60's television.

Buy The Avengers on DVD

Many Avengers fans may not be aware that Ian Hendry (as Dr. David Keel) originally played the main character on the series. The original idea for the Avengers was also totally different from what eventually became the norm. Each week Dr. Keel was going to select from a number of agents who would assist him in that week's episode pretty much like what happened five years later when "Mission Impossible" hit the airwaves. But just like Mission Impossible became concentrated on several main characters, the Avengers soon settled down into two main characters each week.

There is a really good reason why even devout fans might have trouble remembering Ian Hendry. There was a writers' strike in the middle of the first season and Ian decided to leave the show. To make matters worse, there is only one episode from the first season that exists today. Luckily it's one that included Ian Hendry. It's episode #15, "The Frighteners".

John Steed had his own cure for a hangover called the "National Anthem". It was made up of 1 raw egg, 3 or 4 shakes of worcestershire sauce, and 1 dash of salt.

In the fourth season when Diana Rigg joined the cast, stunt arranger "Ray Austin" told the Avengers' producers that he wanted to have Mrs. Peel use Kung Fu to fight evil-doers. They had never heard of Kung Fu and told him to just stick to the Judo that John Steed's former partners had used. Austin taught Diana Rigg Kung Fu moves anyway and when the producers saw her in action, they gave in.

While Patrick Macnee obtained American citizenship in 1959, he also remained a Brit! He has duel citizenship and two passports!

Although his spy work was very dangerous, John Steed was only slightly hurt in three episodes and he was knocked unconscious in six! That's not too shabby for a 161 episode run!

Honor Blackman had previously appeared on another British series titled, "The Four Just Men" and in the 1990s she starred as "Laura West" on another series, "The Upper Hand" which was the British version of a U.S. series titled, "Who's the Boss?"

Diana Rigg was "Knighted" by Queen Elizabeth II in 1994. For my fellow Americans who might not be familiar with British tradition, a female who has been knighted is not referred to as "Sir". Ladies get the title, "Dame". So Diana Rigg's full proper title is "Dame Rigg - Commander of the British Empire"! Dame Rigg also got to be James Bond's first onscreen wife in the 1969 movie, "Her Majesty's Secret Service".

The title song and opening sequence video were changed beginning in the fourth season.

The Avengers was the first British TV series to be broadcast in a regular fall schedule on a U.S. network.