1985-1989 | Syndication
Added to the database on October 9, 2008
Rate
(18 votes)
Cast & Characters | Broadcast History | Theme Song | DVDs | Watch Episodes | Photos | Trivia | Comments
Small Wonder is a sci-fi sitcom that aired in first-run syndication from 1985 to 1989. The show chronicles the family of a robotics engineer who, after he secretly creates a robot modeled after a real human girl, tries to pass it off as their daughter, Vikki.
Small Wonder was a sci-fi sitcom about a family who has a robot daughter. Ted Lawson, an engineer at a huge robotics firm, brings home a project that he is working on: a robot in the shape of a 10-year-old girl. The robot was a Voice Input Child Indenticant (V.I.C.I.), but was nicknamed Vicki for short. Not only did she brighten up Ted's wife Joan, but also was a great sister to their only child Jamie Lawson. They tried to keep the fact that Vicki was a robot from the entire world, but found it difficult when their neighbors, The Brindles, started snooping around the house. What the bad part was, Brandon Brindle, the head of the Brindle family, was Ted's boss and he does his best to lie, cheat, and steal to get him further up the corporate ladder. His wife, Bonnie, was no better than he was, and his bratty daughter Harriet had a killer crush on Jamie. 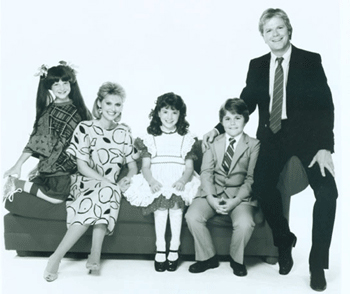 Jamie, however, would rather play with Reggie, his best friend and confidant than to have Harriet chase him everywhere. Jamie also tried to teach Vicki how to be a normal kid, but all she could do is mimic people and do things literally. Vicki also had an evil side to her named Vanessa, who was smart-mouthed, conniving and treacherous at times. But other than that, the Lawsons enjoyed four years of living with a robot and no one outside the family was ever the wiser, not even the ever-nosy Brindles.
Small Wonder ran in syndication from 1985 to 1989 and was a ratings hit. There were talks of doing a spin-off series dedicated to Vanessa named Too Good to Be True but it died in the planning stages.