ABC
Added to the database on October 8, 1999
Rate
(36 votes)
Cast & Characters | Broadcast History | Theme Song | DVDs | Watch Episodes | Photos | Trivia | Comments
Happy Days is a sitcom that aired from 1974 to 1984 on ABC. Created by Garry Marshall, the series showcased an idealized vision of life in mid-1950s to mid-1960s America. 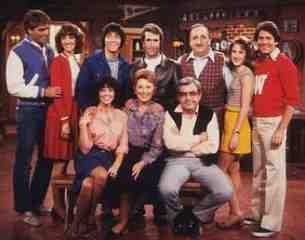 Less than a year after Ron Howard played a college-bound adolescent enjoying a final, summer-of-1962 romp with old friends in American Graffiti, he turned up as high school innocent Richie Cunningham in the memorable, ABC television network debut of Happy Days, set a few years earlier in Milwaukee. The show would last a decade and go through many changes in tone, cast, and character development, but that first season got a boost from the natural perception that it had some things in common with Graffiti: Howard, of course, but also fumbling teenage sex, drag races, drive-in food, pesky little sisters, and laconic greasers.

Happy Days is a sweet trip back to the Garry Marshall-produced sitcom's 1974 entry in primetime television, before political correctness would make stories about clean-cut boys fixated on seducing girls unthinkable, and long before older kids were defined by angst on the WB and Fox TV. At least in its first year, before Happy Days developed more of a comic-book feel and energy, the show was about Richie's all-too-human inclination to grow up too fast, to bite off more than he could chew and learn poignant lessons in the process. He was a sympathetic naif, not the charming braggart he later became, and major characters appear to have been created to provide both ballast and motivation. Among them is best friend Potsie (Anson Williams), a superficial hustler who typically incites Richie's enthusiasm for booze, reputed nymphomaniacs, and sophisticated, older girls, and fast-talking Ralph Malph (Donny Most), owner of a fantastic, yellow hot rod. More important are counterparts Arthur "Fonzie" Fonzarelli (Henry Winkler), a vaguely dangerous drop-out, and Richie's exasperated father, Howard Cunningham (Tom Bosley), each of whom provides Richie the validation of an experienced male: Fonzie's raw worldliness versus Mr. C's seasoned view of a man's responsibilities.

Currently not available to stream online.

The Happy Days TV show was a "spin-off" of a segment on "Love, American Style".

Robin Williams guest-starred on Happy Days as Mork (which later inspired the series on the episode "My Favourite Orkan". This was only Robin's second TV appearance (he had previously appeared on Rowan & Martin's Laugh In)!

Happy Days turned out to be a "spin-off machine" itself. "Laverne and Shirley", "Mork and Mindy", "Out of the Blue" and "Joanie Loves Chachi" were all Happy Days spin-offs.

Mork and Mindy both appeared on the pilot episode of "Out of the Blue". Mork visits his old friend "Random" (An Angel). During the show it's revealed that Ork and Heaven are near each other! "Out of the Blue" only lasted four months.

Fonzie was originally supposed to be called Arthur Maschiarelli. That was Gary Marshall's real last name (The creator of the show). The plan was to have Fonzie's nickname be Mash but it was feared that viewers would be reminded of the 1972 TV show of that name.

Linda Purl ("Matlock" and "First Monday") appeared as Richie's girlfriend "Gloria" in season 2 and then returned to Happy Days in the 10th season to play Fonzie's girlfriend "Ashley Pfister". Ashley was a wealthy, divorced socialite. On Laverne & Shirley the Pfisters were often referred to as the proprietors of many businesses in Milwaukee including The Hotel Pfister, Chez Pfister, and "Pfister Fong's".

Most people are aware of Ron Howard's acting, producing, & directing background, but he also wrote 4 movie scripts! The were Grand Theft Auto, Cotton Candy, Parenthood, and Far And Away!

Happy Days didn't appeal to the network executives at first but after the huge success of the movie "American Graffiti", the series looked like a much better bet.