CBS
Added to the database on September 23, 2008
Rate
(13 votes)
Cast & Characters | Broadcast History | Theme Song | DVDs | Watch Episodes | Photos | Trivia | Comments
Cagney & Lacey is a sitcom that aired on the CBS for seven seasons from 1981 to 1988. A police procedural, the show stars Tyne Daly and Sharon Gless as New York City police detectives who led very different lives: Christine Cagney (Gless) was a single, career-minded woman, while Mary Beth Lacey (Daly) was a married working mother. The series was set in a fictionalized version of Manhattan's 14th Precinct.
Directed by Karen Arthur, written by a female team, and starring two filmic heroes of the feminist movement--Sharon Gless as Christine Cagney and Tyne Daly as Mary-Beth Lacey--the show pioneered on-screen presentation of independent, working women. With Cagney as the career-minded single woman, and Lacey as the mother/wife juggling job with home time, the two detectives serve as foil characters, the way other cop shows such as ChiPs, Moonlighting, or Charlie's Angels starred police with opposing opinions. But where other shows cast the foxiest people possible, Cagney & Lacey relied on character development instead of sex. 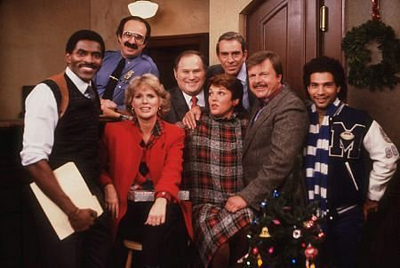 Sharon Gless was not the first Detective Christine Cagney. Loretta Swit played the role in the TV pilot movie and Meg Foster was Cagney in the first regular episodes. Sharon Gless replaced Foster after the first few episodes.

The Cagney And Lacey pilot got huge ratings when it aired so CBS rushed it into production in time to air in mid-season. The ratings were very poor and CBS decided that the two main characters (Daly and Foster) were too "hard"; in other words, too "women's lib" and not feminine enough. When Meg Foster was replaced with the very feminine Sharon Gless ratings improved slightly. The show also got a lot of attention over the anti "women's lib" casting decision. CBS decided that it wasn't enough improvement and cancelled Cagney And Lacey. There were so many complaint letters from hard-core fans that CBS changed their minds and the show went on to become a hit and aired for 5 more seasons!

The women's lib contraversy was well deserved. While explaining the reason for hiring Sharon Gless, an unnamed CBS executive said the following in an interview with TV guide, "They were too harshly women's lib, too tough, too hard and not feminine. The American public doesn't respond to the bra burners, the fighters, the women who insist on calling manhole covers - people hole covers. We perceived them as dykes."

Tyne Daly's brother is Timothy Daly ("Wings" and "Private Practice")! She is also the granddaughter of former Supreme Court Chief Justice, "Earl Warren"! Then years later, Tyne starred on the series, "Judging Amy (1999)" as the mother of a Judge.

Sharon Gless and the producer of Cagney And Lacey, Barney Rosenzweig married in 1991. Sharon's grandfather, Neil McCarthy, was an entertainment lawyer who represented Louis B. Mayer, Cecil B. DeMille and Howard Hughes! Sharon has the distinction of being the last performer to work under a standard studio contract! She signed a 10-year contract in 1974 and eight years later in 1982, all others had expired.

For every single one of the full seasons on the air, one of the Cagney And Lacey lead actresses won the Emmy for Best Actress in a drama series! Tyne Daly won four times and Sharon Gless won twice!