CBS
Added to the database on October 1, 1997
Rate
(24 votes)
Cast & Characters | Broadcast History | Theme Song | DVDs | Watch Episodes | Photos | Trivia | Comments
Growing Pains is sitcom starring Alan Thicke about an upper middle class family, residing in Huntington, New York, with a working mother and a stay-at-home psychiatrist father raising three children together, that aired on ABC from 1985 to 1992. For those who grew up with the Seavers, and in need of a retro blast of '80s nostalgia, Growing Pains will still, to quote the theme song, show you that smile again. 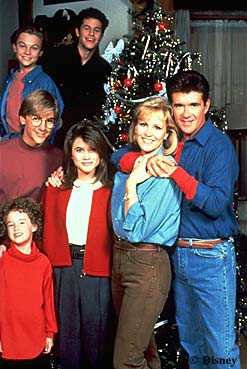 Meet the Seavers in this hilariously successful late eighties sit-com about a family of five living out on Long Island. Maggie has recently rejoined the workforce as a journalist leaving Jason a psychiatrist to juggle his responsibilities to his patients and his three kids by working from home. Mike's the oldest and possibly the most difficult to handle! Whether it's for girls dirt bikes or The Boss Mike uses his charming smile to finagle his way into trouble. The youngest Ben tries to tag along with his big brother learning to be a little con-artist in his own right. And amid the chaos Carol the middle child tries to keep her head on straight and maintain her straight-A status at school. Join the Seavers as they experience the growing pains of family life including a few disputes sprinkled in among lots of love and laughter.

The show resurrected the career of failed talk-show host Alan Thicke and catapulted Kirk Cameron to teen-idol status. Other cast members included Joanna Kerns (conflicted working mom Maggie),a hearty and seemingly healthy Tracey Gold (brainy daughter Carol), and Jeremy Miller (precocious younger son Ben). Growing Pains cracked the Top Ten in its first season, and while the cast members are not the most natural comic actors, by the first season's end their bond is palpable and the characters really do seem like family. Thicke's Dr. Jason Seaver is a sitcom anomaly: a work-at-home dad. He has moved his psychiatric practice into the den after Maggie takes a job as a journalist. His belief system is put to the supreme test by his three children, especially 15-year-old Mike (Cameron), whom Maggie calls "a hormone with feet."

"As Long As We Got Each Other"
Sung by B.J. Thomas and Jennifer Warnes

Show me that smile again. (Show me that smile)
Don’t waste another minute on your cryin’.
We're nowhere near the end (nowhere near)
The best is ready to begin.
Oooohhh. As long as we got each other
We got the world spinnin right in our hands.
Baby you and me, we gotta be
The luckiest dreamers who never quit dreamin’.
As long as we keep on givin’
we can take anything that comes our way
Baby, rain or shine, all the time
We got each other Sharin’ the laughter and love.

The Seaver family lived on Long Island in New York.

The newspaper that Maggie Seaver worked for was the "Long Island Herald". The name that she used on the articles she authored was her maiden name, "Maggie Malone".

Growing Pains created a "spin-off series" when Graham Lubbock, the lousy teacher who was played by actor "Bill Kirchenbauer" moved to a new series titled, "Just the Ten of Us"! Lubbock moved his family to Eureka, California to become a coach at an all boys Catholic school.

On episode #96 of Growing Pains titled, "Fish Bait", a love interest (Kate MacDonald) for Mike Seaver was added to the series. Kate was played by actress Chelsea Noble who would become Kirk Cameron's real-life wife just 21 months later! It's notable that Kirk and Chelsea are still together today with 17 years of marriage! It is possible for show people to make successful relationships!

On October 26, 1988 in the Growing Pains episode titled, "Birth of a Seaver", the Seaver kids got a new little sister named, "Chrissy". Amazingly, two years later, in 1990, Chrissy had somehow become seven-years-old!

In addition to being a fine actore, Alan Thicke wrote the theme songs for the series "Diff'rent Strokes" and "The Facts of Life" but not for Growing Pains, his own series!

During the sixth season, Growing Pains ratings were getting pretty bad. In episode #138, "Not With My Carol You Don't", a 16-year-old Leonardo Dicaprio was added to the cast as a homeless teenager that the Seaver's took in off the street. The producers had hoped that Leonardo would bring in more teenage viewers but it the only thing that helped was DiCaprio's career. Shortly after Growing Pains was canceled, he got a major role in the 1993 film, "This Boy's Life" and became the superstar that he remains today!