CBS
Added to the database on December 15, 2008
Rate
(22 votes)
Cast & Characters | Broadcast History | Theme Song | DVDs | Watch Episodes | Photos | Trivia | Comments
Father Knows Best is a radio and television comedy series which portrayed a middle class family life in the Midwest. It was created by writer Ed James in the 1940s, and ran on radio from 1949 to 1954 and on television from 1954 to 1960. 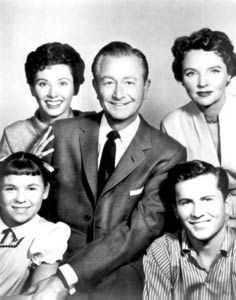 It's telling that this family favorite began on radio as Father Knows Best? When the show came to CBS in 1954, the question mark disappeared. Contrary to popular opinion, however, Springfield, Ohio, insurance agent Jim Anderson (Emmy winner Robert Young) doesn't have all the answers. He and his wife, Margaret (fellow Emmy winner Jane Wyatt), come close, though. Were the show in production now, Anderson wouldn't smoke, but Father Knows Best reflects the standards of its time--separate beds and all. The sweet-natured pilot sets the tone when 14-year-old Bud (Billy Gray) frets about the school dance until Jim arranges for his 17-year-old sister, Betty (Elinor Donahue), to show him some steps. Other storylines revolve around community service and feeling needed, while "Thanksgiving Day" offers a glimpse of Jim's imperfect side when he dismisses a poem written by nine-year-old Kathy (Laurin Chapin), who overhears him; he realizes he was holding Kitten to impossible standards. As Chapin notes in the bonus interview (in which Donahue also features), the primary themes were cooperation and forgiveness. Naysayers can knock Father Knows Best for being square, but it espouses timeless values. And who's to say the lingo wasn't hip for the 1950s? Colorful examples include "goobers," "criminy," "creepers," "knot-head," and "simply utterly."

Before the TV show, there was a Father Knows Best radio show that aired from August 25, 1949 through November 19, 1953! Robert Young was the only cast member to make the transition from radio to television.

The series was so popular that repeats continued to be shown in primetime for three years after production ended and during the daytime for another 5 years after that! The public couldn't believe that the show was ending as it was still #6 in the ratings at the time. The main reason given was that the main premise of the show was a father guiding his children towards adulthood. Well, Betty and Bud were pretty much grown up. Another reason given was that after 6 years of the same series, many of those involved were "losing their creative juices". They wanted to go out on top rather than let the show deteriorate.

Robert Young has a Star on the Hollywood Walk of Fame (Approximately 100 feet west of Mann's Chinese Theater).

Most programs at the time were filmed with 3 cameras in front of a live audience. Father Knows Best used only one camera and no audience.

Unfortunately, 13 episodes can not be found. "Stagecoach to Yuma" (#40) and "Not His Type" (#202) were original episodes. The other 11 were "flashback" shows. The distributors decided that "flashbacks" would not work well in syndication and apparently disposed of them.

In 1959, the U.S. Treasury department paid to have a 30 minute Father Knows Best episode produced. It was circulated to schools, churches and other groups for the purpose of selling savings bonds. It never aired on tv. The title was "24 Hours in Tyrantland".

Jim Anderson was the manager of "General Insurance Company".

The show's theme song was entitled, "Waiting". While they were never used on the program, there were Lyrics written. Here they are: "Waiting, for love to find us, is something worth waiting for. Someday, my arms will hold you, my lips will kiss you, forever more. Yes, waiting, can be so lonely, yet somehow we'll see it through. Knowing, there's someone waiting right there just for you".