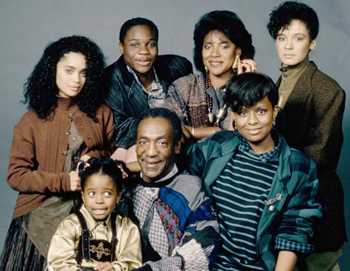 Looking back at season 1 of The Cosby Show, it's easy to forget that momentous history was being made. Not only did this immensely popular sitcom hold the #1 spot among all network TV shows for five consecutive seasons (a record that still stands), but it promoted an evolutionary progression that influenced the entire TV industry from that point forward. African Americans had enjoyed sitcom success in the past (on Julia, The Jeffersons, and Good Times), but the idealized family of Cliff and Clair Huxtable (Bill Cosby and Phylicia Rashad) represented a new and quietly revolutionary perspective; married for 21 years with five children, the Huxtables were happy and successful, and issues of race were almost entirely irrelevant to the show's universal appeal.

Making their Thursday-night debut on September 20, 1984, they were conceived by Cosby (as "executive consultant Dr. William H. Cosby Jr., Ed.D."), cocreators Ed. Weinberger and Michael Leeson, and executive producers Tom Werner and Marcy Carsey, with a matter-of-fact approach to upgrading the African American image, built upon Cosby's rubber-faced popularity as a stand-up comedian and rooted in the complete and unbiased integration of the black experience into the American mainstream. More to the point, The Cosby Show was eminently respectable family entertainment, perhaps too squeaky-clean for some tastes, but immediately popular at a time when Eddie Murphy (in Beverly Hills Cop) was honing a more profane image that Cosby disapproved of.

The show was also perfectly cast for mass appeal, from the irresistible precociousness of Keshia Knight Pulliam (as the youngest and most charming Huxtable daughter, Rudy) to the stylish adolescence of Lisa Bonet (years before her controversial role in Angel Heart) as 16-year-old Denise; Malcolm-Jamal Warner as outspoken teenager Theo; Tempestt Bledsoe as sensible younger daughter Vanessa; and Sabrina LaBeauf as college student and eventual mother of twins, Sondra. Combined with the effortless chemistry of Cosby and Rashad, the entire cast forged an easygoing, loosely-rehearsed dynamic that was genuinely familial.

Buy The Cosby Show On DVD

ABC had a chance to own The Cosby Show but they rejected it. NBC was smarter and landed the hit comedy series that raked in the money for eight full seasons!

Then when NBC put The Cosby Show in the same time slot that CBS was airing the hit series, "Magnum P.I.", nearly everyone in the business agreed that The Cosby Show would be lucky to survive a full season. Wrong again!

During the summer hiatus in 1988, Lisa Bonet and her husband Lenny Kravitz announced that they were pregnant. The producers of The Cosby Show were concerned that viewers might not accept Denise as a single mother after four years of her "nice girl" image so they had her drop out of college and spend the fifth season in Africa.

Bill Cosby didn't care much for working in Hollywood so he demanded that The Cosby Show be produced in New York.

Even though the Huxtables lived in Brooklyn, the exterior shots of their home on The Cosby Show is actually a house located at 10 Saint Luke's Place in Manhattan.

The Cosby Show was based on Bill Cosby's family in real-life. He also has a wife (who he's still with after 44 years as of 2008) and four daughters and one son who is the middle-aged child!

Sitcoms were beginning to fade in the ratings in the mid 1980s. TV Guide stated that The Cosby Show was TV's "biggest hit in the 1980s and almost single-handedly revived the sitcom genre and NBC's ratings fortunes".

"All in the Family" and "The Cosby Show" are the only two U.S. programs that managed to remain at the number one position in the ratings for five seasons in a row!