NBC
Added to the database on July 22, 2011
Rate
(40 votes)
Cast & Characters | Broadcast History | Theme Song | DVDs | Watch Episodes | Photos | Trivia | Comments
Adam-12 is a television police drama which followed two police officers of the Los Angeles Police Department, Pete Malloy and Jim Reed, as they patrolled the streets of Los Angeles in their patrol unit, 1-Adam-12.
Created by Jack Webb of Dragnet fame, follow two Los Angeles police officers as they patrol the streets of Southern California. Adam-12 was the first series to realistically portray the joys/frustrations of being a police officer in the late 1960's-early 1970's. This attention to detail made the show a catalyst for uncounted numbers of people to enter the law enforcement/EMS agencies when they became adults. Martin Milner stars as Pete Malloy, a veteran cop whose new partner (following the death of the previous one) is Jim Reed (Kent McCord), a rookie who's more than a little wet behind the ears. The show follows them as they make the rounds in their police black & white, dealing with all manner of circumstances, from the mundane (traffic violations, petty domestic disputes, noise complaints) to the monstrous (murder, drugs, child abuse, suicide). 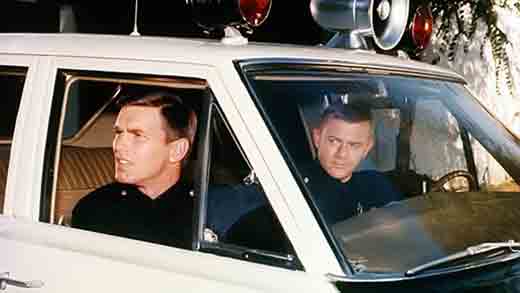 Each about 25 minutes long, the episodes chronicle the quotidian vicissitudes of these men in uniform, as opposed to the detectives, forensic experts, lawyers, and such who populate today's cop shows. Whatever the storyline, the tone is fairly tame, with none of the graphic violence common to later cop shows. And while the '65 Watts riots had already taken place, Rodney King, the Rampart scandal, and numerous other ugly events were far in the future. Thus Adam-12 evinces little or none of the now-vast divide (most of it racially based) that exists between the LAPD and much of the community; on this show, the cops are the good guys, without much nuance (which helps explain its popularity with real police officers). That's certainly not all bad; Adam-12's realism (for its time) and lack of pretension are refreshing, and the show is looser and not nearly as humorless as Dragnet.


View all Adam-12 DVDs, books, merchandise and collectibles from Amazon.com

The fact that Adam 12 portrayed every facet of police work as realistically as possible even if sometimes boring will come as no surprise to fans of the series' producer, "Jack Webb" ("Dragnet"). Jack was a meticulous man who felt that a series about cops should be true to the truth. He was so successful that many police academies used episodes of Adam 12 as training films! Of course, they managed to find lots of true to life exciting things in the everyday lives of cops.

The police station that Jim and Pete worked out of was, in real life, the "Rampart Division" located just northwest of the downtown area in Los Angeles, California.

Martin Milner's daughter "Amy" did not follow her father into an acting career but she did appear on television once on Adam 12! You can see her in episode #164 titled, "Victim of the Crime". She played the daughter of a shopkeeper who was shot during a robbery.

Fans of Adam 12 may remember often hearing Jim or Pete on the radio saying, "One Adam 12". The "One" referred to the division that they were in, "Adam" stood for "two cops in a patrol car", and "12" stood for the area within division one where they were assigned to patrol.

Adam 12 was not Martin Milner's first starring role on a television series. For four seasons from 1960-1964, he played one of two main characters on the series, "Route 66".

Adam 12 was on the air for seven years and poor Pete and Jim only got promoted once each! In the third season, Jim was promoted from "Rookie" to "Officer". In the fourth season, Pete was promoted to "Policeman 3" which left him just one step below Sergeant.


« The A-Team Adventures of Ozzie & Harriet »