NBC
Added to the database on September 30, 2008
Rate
(14 votes)
Cast & Characters | Broadcast History | Theme Song | DVDs | Watch Episodes | Photos | Trivia | Comments
Family Ties is an sitcom that aired on NBC for seven seasons from 1982 to 1989. The sitcom reflected the move in the United States from the cultural liberalism of the 1960s and 1970s to the conservatism of the 1980s. This was particularly expressed through the relationship between young Republican Alex P. Keaton (Michael J. Fox) and his ex-hippie parents, Elyse and Steven Keaton (Meredith Baxter-Birney and Michael Gross).
Though it emerged during the Reagan era, Family Ties remains as relevant as ever. Most children find their parents a little embarrassing, but what sets this sitcom apart is that former hippies Steven and Elyse Keaton, (Michael Gross and Meredith Baxter-Birney), now find themselves in 1980's America trying to raise a traditional suburban family. Son Alex P. Keaton (three-time Emmy winner Michael J. Fox) is an ambitious young Republican, and his sister Mallory (Justine Bateman) is a shallow victim of the corporate culture, obsessed with music, clothes and boys. Their only normal kid is young Jennifer (Tina Yothers), a bit of a tomboy. In later seasons, the Keatons add a fourth child, Andrew. Most of the comedy arose from the conflict between the liberal parents and the conservative children. It works because the Keatons obviously love each other--foibles and all. 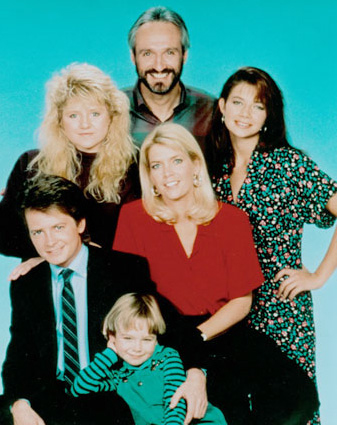 {videobox}/media/video/familyties.mp4{/videobox}
"Without Us," by Jeff Barry and Tom Scott, sung by Johnny Mathis and Denice Williams.

Family Ties was based upon serie's creator/producer Gary David Goldberg and his wife Diane's lives as former "flower children" who, like most, made the transition into a typical family life in the suburbs.

Meredith Baxter and Michael Gross were born on the very same day and not just the same day of the year. They were both born on June 21, 1947!

If you didn't watch Family Ties, you may still remember Meredith Baxter as "Nancy Lawrence Maitland" on the TV series, "Family".

Matthew Broderick was the first choice to play the role of Alex but Matthew's father was terminally ill at the time so Matthew turned down the role so he could spend more time with his dad. Then, Gary David Goldberg hated Michael J. Fox's first audition! He thought that Michael played the part too "smart-alecky". Family Ties' casting director, Judith Wiener" saw the possibilities in Michael's performance though and literally begged Goldberg to give him another chance. Michael toned it down just a bit and Goldberg changed his mind. Then on top of all that, Brandon Tartikoff (President of NBC's entertainment division) felt that viewers wouldn't be able to believe that Michael Gross and Meredith Baxter could have such a short son! Apparently, however, Tartikoff also eventually became convinced and hired Fox who would become the main reason that Family Ties lasted for seven wonderful seasons.

Another interesting thing happened at Michael J. Fox's audition. His character was originally written to be named Alex Keaton but during Michael's audition, he ad-libbed and added the middle initial "J.". The writers thought it was a great idea and wrote it into the scripts.

For the first couple of seasons, the Keatons resided in Cleveland, Ohio. Then, all of a sudden, they were living in Columbus, Ohio! There was never any explanation given about how that happened!

Alex P. Keaton's first real girlfriend on Family Ties was Ellen Reed. Ellen was played by actress, Tracy Pollan. Her first appearance was on episode #75, "The Real Thing - Part 1" which aired on September 26, 1985. Less than three years later, she and Michael J. Fox would become husband and wife in real life! On the very last episode of another Michael J. Fox series titled, "Spin City", it was mentioned that Alex P. Keaton was a Congressman from the state of Ohio! Apparently the cast members didn't want anything to do with a possible future reunion show. They actually asked if the final episode could be written with all of their characters dying in a plane crash! Most of us fans thank the producers for, instead, having a 2-part finale where Alex flys away to New York City to start his dream job on Wall Street!