NBC
Added to the database on January 22, 2009
Rate
(9 votes)
Cast & Characters | Broadcast History | Theme Song | DVDs | Watch Episodes | Photos | Trivia | Comments
I Married Joan is a sitcom that aired on NBC from 1952 to 1955 that starred veteran vaudeville, film, and radio comedienne Joan Davis as the manic wife of a mild-mannered community judge, Bradley Stevens.
I Married Joan starred Joan Davis, a movie and radio comedienne billed as "America's Queen of Comedy," and Jim Backus, the voice of Mr. Magoo and the popular character Thurston Howell III from Gilligan's Island. The show centered on Joan, a scatterbrained housewife, and her husband, Bradley Stevens, who was a staid and settled domestic court judge. Beverly Wills, Joan Davis' real-life daughter, also co-starred on the show playing the part of her sister. The show was cut from the same mold as I Love Lucy, with Joan Davis' comedy antics derived from the physical school of humor. Ms. Davis produced the show under her own production company for NBC and the series ran for three years between 1952 and 1955. 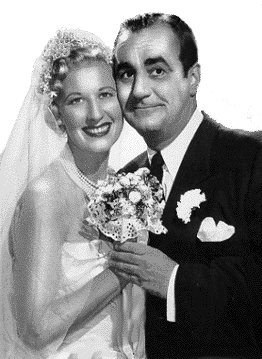 I Married Joan on DVD


View all I Married Joan DVDs, books, merchandise and collectibles from Amazon.com

View allI Married Joan episodes the you can watch for free online.

I Married Joan was Joan Davis' only series but there were plans to have her star in another one about the first female astronaut! Unfortunately, it never happened. She had a terrific career though. She started in Vaudeville and made quite a few movies in the 1930s and 40s. She received as much as $75,000 per film by the end of her movie career; a huge amount of money in those days! She received $1 Million per year for her radio program "Joanie's Tea Room" in 1945!

There are some similarities between this program and the "I Love Lucy" show of the same era. "I Married Joan" aired its first episode exactly one year to the day after the first episode of "I Love Lucy". Both series were about "zany" "scatter-brained" housewives of successful husbands. Both Lucille Ball and Joan Davis got a lot of resistance from being cast in their roles because they were not considered the typical "beautifull bombshells" that got most of the female roles at that time. Mary Jane Croft who played "Helen" also appeared in 2 episodes of "I Love Lucy" before working on "I Married Joan" and later became a regular cast member (Betty Ramsey) on "I Love Lucy" in 1957 after this show ended.

Jim Backus is best known for doing the voice of the Mr. Magoo cartoon character and for his role as Thurston Howell III on "Gilligan's Island". One of his teachers in grade school was Margaret Hamilton who played the role of the Wicked Witch of the West in "The Wizard of Oz". While attending the Kentucky Military Academy, he met classmate Victor Mature. Most people don't realize that he played the role of James Dean's father in the classic movie "Rebel Without A Cause.

Joan Davis started performing at six years of age. She was known then as "Cyclonic Josephine Davis" and "The Toy Comedienne".

Jim Backus was not the only cast member to do voices. Hope Emerson did the voice for Elsie the Cow on the Borden Milk commercials.