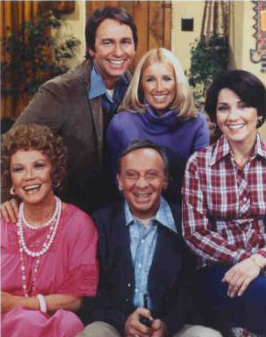 Come And Knock On Our Door… In the spring of 1977,ABC network executives gave a six-episode "trial" run to a new sitcom called Three's Company. Almost overnight, it became one of the biggest hits of the entire season. Racy and daring for its time, this breakthrough bedroom farce skyrocketed to the Top 10 in its second week. Almost twenty-five years later, it remains one of the best-loved TV series of all time. Based on the provocative Brit-com Man About The House, Three's Company follows the innuendo-laden but platonic misadventures and misunderstandings of clumsy and girlcrazy Jack Tripper (John Ritter in the role that won him an Emmy®, a Golden Globe and the hearts of millions) and his two female roommates, pretty and practicalminded Janet Wood (Joyce DeWitt) and naïve and dim-bulb blonde Chrissy Snow (Suzanne Somers). Along with their sexually frustrated landlords the Ropers (Norman Fell and Audra Lindley) and Jack’s fast-talking pal Larry (Richard Kline), these three outrageous roommates tripped and jiggled through a world of slapstick pratfalls and some of the most scandalously titillating comedy America had ever seen.

Religious leaders and critics found the Three's Company TV show very distasteful but viewers loved it! The subject matter was a little "spicy" for it's day and the publicity for the series was even more so! In February of 1978 a photo of Chrissy in an undergarment that appeared to be falling off, and with Jack leering over her shoulder appeared on the cover of Newsweek magazine! That never actually happened on the TV show.

The ratings for the very first episode of Three's Company were higher than those for the premieres of any mid-season replacement series up until that time! When you add to that the fact that the three main stars of the series were pretty much unknown up until that time, it's pretty impressive!

There were two "spin-offs" of the Three's Company TV show. In 1979, Norman Fell and Audra Lindley left the program to star in their own series called, "The Ropers (1979)". Don Knotts became the new landlord. In 1984, Janet got married and Terri moved to Hawaii and the series ended. John Ritter didn't waste any time though! He continued his role as Jack Tripper on the series, "Three's A Crowd (1984)" which began exactly one week after "Three's Company" ended!

Actually, Three's Company was based on a hit British TV show titled, "Man About The House". It is one of the few shows that has been successfully Americanized from a British series! "Man About The House" had two "spin-offs" in the U.K.; "George and Mildred" which became "The Ropers" in the U.S. and "Robin's Nest" which became "Three's A Crowd (1984)" in the U.S.! Note that both of those UK spinoffs were just one season wonders even with popular characters from another hit U.S. series!

Suzanne Somers became unbelievably popular on Three's Company! In 1980, she demanded a huge increase in salary and a share of the profits. The producers absolutely refused and immediately reduced her role to an occasional phone call from Fresno, California (where she was taking care of her sick mother). Soon thereafter, they completely wrote her out off the show. She was replaced by "Cindy" who was her "clumsy" cousin. Cindy was later replaced by "Terri", a Nurse. Suzanne's career nosedived for many years thereafter, but eventually made a recovery. For those of you too young to remember this sitcom, you might remember Suzanne Somers as Carol Foster, the mother on the series, "Step By Step (1991)". Suzanne did have a little comfort over her dilema. The TV show dropped dramatically in the ratings after she left. It was #2 in the ratings for the two seasons before she left.

In 1982 Jack got his own restaurant called "Jack's Bistro", specializing in French cuisine.

When he lost his roommate (Janet got married and Terri moved to Hawaii) Jack moved in with his new girlfriend. That's how John Ritter made the transition to his new series, "Three's a Crowd". Three's Company was based on the British series, "Man about the House".

Mr. Roper didn't own the apartment building. It was owned by his brother "Bart". There were many references during the series about what a tightwad Bart was, usually when the building needed a repair. Mr. Roper would shrivel in fear wondering what Bart was going to say about the expense!