ABC
Added to the database on September 23, 2008
Rate
(11 votes)
Cast & Characters | Broadcast History | Theme Song | DVDs | Watch Episodes | Photos | Trivia | Comments
Bosom Buddies was a sitcom that starred Tom Hanks and Peter Scolari and ran from 1980 to 1982 on ABC that followed the misadventures of two single men, working in creative advertising, struggling in their industry while disguising themselves as women in order to live in the one apartment they could afford.
The show features

Some like it Hanks in this cross-dressing sitcom that launched one of Hollywood's most accomplished careers. It doesn't get any "Before They Were Stars" than this. The future Oscar-winner hadn't even made Bachelor Party yet! Hanks and Peter Scolari star as struggling ad-agency artist and writer Kip and Henry, best friends whose apartment building is demolished. Desperate for a place to live, they transform themselves into Buffy and Hildegarde so they can live in the for-women-only Susan B. Anthony Hotel. Kip and Henry pass themselves off as the "girls': brothers, allowing Kip to romance nurse and aspiring dancer Sunny (Donna Dixon), and Henry to write a book about the experience. "This is nuts, stupid, crazy," Kip rants, and so it is, but Bosom Buddies is never a drag, thanks to Hanks and Scolari's spontaneous chemistry. They are a comedy team without, pardon the expression, a straight man. The late Wendie Jo Sperber is a force of nature as Amy, the ad-agency receptionist with an unrequited crush on Henry, leading to one of this season's less jokey, more character-driven episodes, "Beauty and the Beasts." Holland Taylor is at her imperious best as Kip and Henry's credit-grabbing boss. Lucille Benson replaces the pilot's Edie Adams in Bosom Buddies as the Susan B. Anthony's formidable new manager. 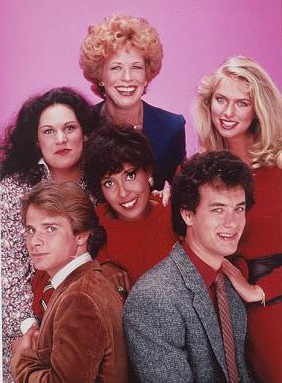 {videobox}/media/video/bosombuddies.mp4{/videobox} "My Life" by Billy Joel

Kip and Henry worked at the "Livingston, Gentry, and Mishkin" advertising agency.

Donna Dixon was a natural choice to play the beautiful Sonny Lumet. Four years earlier in 1976, she won the "Miss Virginia" title. The next year she won the "Miss District of Columbia" title and was 1st runner-up to the 1977 "Miss USA"! One of Donna's best friends is Fran Drescher, star of "The Nanny (1993)" and "Living With Fran (2005)"!

For some strange reason, they recorded the first (Pilot) episode of Bosom Buddies on film and then shot the rest of the series on videotape.