CBS
Added to the database on September 11, 2008
Rate
(20 votes)
Cast & Characters | Broadcast History | Theme Song | DVDs | Watch Episodes | Photos | Trivia | Comments
The Bob Newhart Show is a sitcom that aired on CBS from 1972 to 1978 starring Bob Newhart who portrays a psychologist having to deal with his patients and fellow office workers. The show was filmed before a live audience.
In addition to inspiring a college drinking game that's never gone out of style, The Bob Newhart Show gave one of America's greatest stand-up comedians a perfect sitcom showcase. This wasn't Newhart's first TV show (following the success of his comedy albums, he hosted a short-lived variety show in 1961-62), but it was the first to transfer his wry, inimitable wit to an effective alter ego, and as mild-mannered psychologist Bob Hartley, 43-year-old Newhart found a sublime character conduit for stone-faced sarcasm that was biting but never malicious. 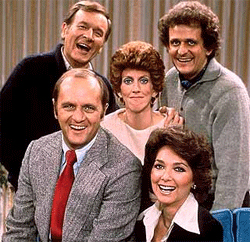 Living in a Chicago high-rise with Emily, his wife of three years and a third-grade schoolteacher (played with underrated smartness by Suzanne Pleshette), 40-year-old Bob divides his time equally between happy (but not too happy) domesticity and time at the office, where he employs a feisty and frequently lovelorn receptionist Carol (Marcia Wallace, who later enjoyed a thriving career providing voices for The Simpsons and other animated shows) who also works for Jerry (Peter Bonerz, who became a respected TV director), a bachelor dentist and Bob's best friend.

The first season (of six, on CBS until August 1978) offered the same high quality as The Mary Tyler Moore Show (also produced by Moore's MTM Enterprises) and established many of the memorable characters who contributed to the show's enduring greatness. Bill Daily (late of I Dream of Jeannie) would thrive as the Hartley's divorced neighbor Howard (his uninvited "Hi Bob!" intrusions inspired that infamous drinking game), while married neighbor Margaret (Patricia Smith) would disappear by season's end. Among Bob's hilarious group-therapy patients, the miserable misanthrope Mr. Carlin (Jack Riley) was a comedic goldmine as the series progressed, but it's Newhart's own comic genius--including his perfected phone-call routines and deadpan reactions to everyday dilemmas--that remained the show's greatest asset.

The Bob Newhart Show On DVD

You might be able to make a case that this series actually returned to the air in 1982 and ran until 1990. During those years, Bob Newhart starred in another hit series titled, "Newhart (1982)" In that series, he played the part of a Vermont Innkeeper married to a woman whose part was portrayed by actress Mary Frann. At the end of that series' final episode, Bob gets hit in the head by a golf ball and is knocked unconscious. When he recovers consciousness, he's in bed with his wife. She turns to ask him what is wrong and it's not actress Mary Frann ... it's Suzanne Pleshette! Bob answers her by saying that he had a dream about being an Innkeeper in Vermont. Yes! It turns out that the entire "Newhart (1982)" series was simply a dream of psychologist Bob Hartley and, therefore, technically, a part of this series!!!

Bob and Emily lived in apartment #523. Bob's office was located in suite #715. The building used for the outside shots of Bob's office building was the Bay Federal Bank Building on Michigan Avenue in Chicago, Illinois.

It must have been fate that got Suzanne Pleshette her role as Emily Hartley! She happened to appear on "The Tonight Show" on the same night as Bob Newhart. The producers for the Bob Newhart Show thought that Suzanne and Bob really complimented each other and that's how she got the role!

The actor who appeared in many episodes and played the mailman at Bob's office building was, "Bill Quinn". Bill just happened to be Bob Newhart's real-life father-in-law! The role was certainly not any charity, however. Bill appeared on television several hundred times over a 65 year career! Bill's best known rolew were probably as "Mr. Van Ranseleer" on "Archie Bunker's Place" and as "Sweeney the Bartender" on "The Rifleman".

There's no doubt that Peter Bonerz is best known to the public as the dentist, Jerry Robinson on the Bob Newhart Show but you've probably seen much more of his work and never realized it! After getting some directing experience on the Bob Newhart Show, Peter went on to become a very busy director! In addition to tons of TV movies, Peter directed mutiple episodes of "E/R", "Alf", "Wings", "Murphy Brown", "Friends", "The Hughleys", and "Good Morning, Miami" among others!

When Bob Newhart first read the outline for the show, he decided that there were a couple of things he wanted changed. His character was originally supposed to be a psychiatrist but Bob felt that would demand seriously unstable patients that wouldn't be appropriate for a comedy series so they changed his character to a psychologist. Bob and Emily were also supposed to have children but Bob felt that would be too much like all the other "kids with a nutsy father" series so they "erased" the kids from the series.