CBS
Added to the database on December 21, 2009
Rate
(6 votes)
Cast & Characters | Broadcast History | Theme Song | DVDs | Watch Episodes | Photos | Trivia | Comments
Mister Ed is a sitcom that aired on CBS 1961 to 1966 about talking horse, of course, and his owner Wilbur.
One of the most successful of the numerous 1960's nonsensical sitcoms was this one about a talking horse. Solid writing, a classic theme song, and palpable chemistry between man and horse led to the show's success. Mister Ed belonged to Wilbur Post played by Alan Young, a young architect who had decided to move out of the city to get a little closer to nature. The rambling country home he and his wife decided upon came complete with a barn that doubled as Wilbur's office and a very talkative palomino named Ed. Problem was Ed didn't care to talk to just anyone, in fact he would only talk to Wilbur (the first human he'd ever met worth talking to). The confusion caused by having a talking horse, and the situations Ed got Wilbur into, and occasionally out of, formed the stories. The rest of the cast is good, but their characters are strictly 1960s sitcom stock. 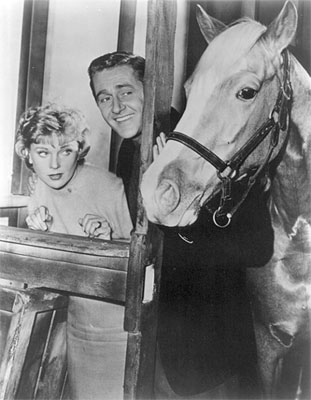 Wilbur's new bride, Carol (the charming Connie Hines), is the dutiful wife with a roast in the oven and who frets over asking her husband for money to buy a new television set. Neighbors Roger and Kay (Larry Keating and Edna Skinner) are the affectionately bickering married couple next door who take the newlyweds under their more cynical wings. It is Ed who gallops off with every scene with the horse's share of the punch lines. They don't make 'em like this anymore, and one can easily see Mister Ed winning over a new generation of kids, of course, of course.

When Wilbur asked Mister Ed why he had never spoken to anyone else, Mister Ed said that Wilbur was the only human being he'd ever met that was worth talking to!

Allan "Rocky" Lane, who supplied Mister Ed's voice, was a retired actor when this series began. He had starred in numerous low-budget westerns during the 1940s.

Mister Ed actually began as a syndicated series. It was so popular with viewers that CBS picked it up for their prime time line-up. Typically, shows that air both syndicated and prime-time happen in the opposite order. They're prime time first and if the ratings drop too low for the networks but still have a "following", they may continue in production for syndication.

Wilbur & Carol Post had to get new neighbors in 1963 after Larry Keating died shortly after the beginning of the season.