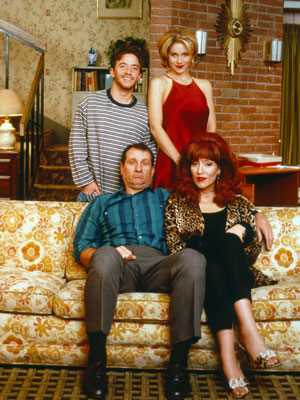 When Married... with Children debuted on Fox TV on April 5, 1987 (followed by The Tracey Ullman Show a half-hour later), the grungy sitcom became an instant flagship for Rupert Murdoch's upstart network. The program's much-publicized working title, Not the Cosbys (a dismissive reference to the cheerful vitality of Bill Cosby's hugely popular television clan on NBC's The Cosby Show) was a dead giveaway. Married... with Children was going to be a trashier, raunchier, and far more cynical view of the American nuclear family. But it turned out the series actually fell into other caustic-domestic entertainment traditions, notably the Don Ameche and Frances Langford radio comedy series from the 1940s, The Bickersons, and Jackie Gleason's TV classic, The Honeymooners.

The jokes were savage, key relationships were marked by ennui and indifference, and the Bundy family name couldn't help but make one think of America's most notorious, real-life serial killer at the time. Yet the show had a hint of Golden Age Hollywood gloss, a retro-screwball feel that one could detect in the snappy verbal warfare between husband Al Bundy (Ed O'Neill) and wife Peggy (Katey Sagal). The characters, and the show, eschewed sentimentality, which certainly opened the floodgates to comic cynicism but also kept a door ajar for moments of genuine sweetness. A decade later, however, by the time Fox cancelled the increasingly expensive series, Married... with Children's first-season tone would be considerably different, replaced by a stronger reliance on running jokes and character stereotypes, particularly concerning Bundy children Kelly (Christina Applegate) and Bud (David Faustino).

Buy Married... With Children on DVD

Either somebody goofed or the Bundys moved up and down their street in Chicago, Illinois during Married With Children's eleven season run. Sometimes their address was shown to be 9674 Jeopardy Lane and other it was 9764! The house that was shown in the opening and closing sequences was actually located in Deerfield, Illinois.

The fountain that is seen at the start of the credits is the Buckingham Fountain located in downtown Chicago.

If you look closely, you can also see the Grizwald's green & brown station wagon in the opening sequence from the 1983 film, "Vacation".

Most sources state that the "Baywatch TV Show" is the longest running series to have never won an Emmy. That's technically true because the time between Baywatch's first and last episodes was approximately 11 years and 8 months. Married With Children also never won an Emmy and its length was 10 years and 2 months. Married With Children, however, ran for 16 more episodes than Baywatch did so it had more opportunity to score an Emmy and, in my opinion, should get the distinction as the biggest Emmy loser of all time.

There was no doubt, however, after Ed O'Neill auditioned for the role as Al Bundy that he was the right actor for the job. His audition required him to walk through the Bundy home's front door. Before Ed opened the door, he exhaled deeply and drooped his shoulders and looked like he was really dreading going home. The producers all agreed that he had a firm grasp on the part!

In the seventh season, the Bundy's adopted a seven-year-old boy named, "Seven" in order to give the writers some new potential storylines. The found it nearly impossible, however, to fit such a young child into the adult themes of Married With Children. The last time he was seen was in episode #146, "Peggy And The Pirates". Peg sent him to bed so she could attempt to make love to Al and that's the last audiences saw of him! He was mentioned three more times but no explanation of why he disappeared was ever given.

At the end of the eleventh season, Fox decided to not renew Married With Children. Like so many wonderful executives, they didn't bother to notify the cast so they ended out getting the news from friends, TV, and fans.

If you were a Married With Children fan, you may also have liked the series, "Unhappily Ever After". Several of the producers were the same on both series and the characters and storylines were very similar.