CBS
Added to the database on October 7, 2008
Rate
(28 votes)
Cast & Characters | Broadcast History | Theme Song | DVDs | Watch Episodes | Photos | Trivia | Comments
Knots Landing is a primetime drama series that aired from 1979 to 1993 on CBS. Set in a fictitious coastal suburb of Los Angeles in California, the show centered on the lives of four married couples living in a cul-de-sac, Seaview Circle. Initially intended to be a Scenes From a Marriage-type drama series, storylines also included rape, murder, kidnapping, assassinations, drug smuggling, corporate intrigue and criminal investigations. By the time of its conclusion, Knots Landing had become one of the longest-running primetime dramas on U.S. television after Gunsmoke and Law & Order, and tied for third place with Bonanza.
Knots Landing was a Dallas spinoff that spent its first season in marked contrast to the latter series' tales of power-grabbing, greed, corruption, conspiracies, and fraternal rivalries. Where Dallas concerned travails of an ultra-rich and influential Texas family, and its many enemies0--all great fantasy stuff--Knots Landing initially evolved as a drama set among Southern California's suburban middle class. Built around the character Gary Ewing (Ted Shackelford), a recovering alcoholic and brother of Dallas' scheming J.R. Ewing (Larry Hagman), Knots Landing is set on a cul-de-sac in a seemingly peaceful neighborhood of modest houses. Gary, one might recall from several episodes of Dallas, is the black sheep of the Ewing clan. His marriage to the mousy Val (Joan Van Ark) was sabotaged by J.R., and their troubled teenage daughter came to live with J.R. and his parents on their expansive ranch. 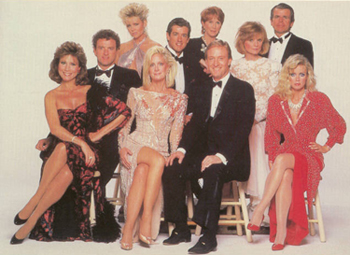 Knots Landing begins with Gary and Val making a fresh start on the West Coast. If their second try at marriage works, they reckon, their daughter can come live with them in a stable environment. Gary, who wants nothing to do with the Ewing oil business, takes a job selling classic cars for his new neighbor, Sid Fairgate (Don Murray). But he reluctantly becomes embroiled, along with Val, in several local issues, the most complicated being J.R.'s plans to drill for oil just off the shore of Gary's adopted community. (Hagman, as a guest star, brings a lot of fun to that episode with his affable villainy.) It doesn't take long, however, for other major characters in Knots Landing to emerge as fascinating people in their own right, with no relationship to Ewing history except friendship with Gary and Val. In fact, Sid and his wife Karen (Michele Lee) are, arguably, the strongest characters in the first season, a couple with such strong underpinnings that their arguments inevitably result in a tighter union. Lee's performance, overall, is the best on the show, and several episodes (that look nothing like a primetime soap opera) are clearly written to spotlight her talent.

Gary's other neighbors include self-centered attorney Richard Avery (John Pleshette) and his beleaguered spouse, Laura (Constance McCashin); plus the youthful if little-seen Kenny (James Houghton) and Ginger (Kim Lankford) Ward. The stories in Knots Landing generally concern ordinary and familiar things: fear of crime, unexpected pregnancies, raising kids, dating, education, marital discord. Sure, many of the same conflicts occur on Dallas, but the fun in watching that show is recognizing that the super-wealthy and powerful struggle with the same problems the rest of us do. In Knots Landing, conflicts are more earthbound. That won't always be the case on this show: over subsequent seasons and with the addition of more characters and the loss of others, the drama will tilt in another direction. The Complete First Season establishes a solid foundation, however, and there's a lot of merit to it.

The Knots Landing TV show was a "spin-off" of the series, "Dallas".

Knots Landing was the second longest-running prime time drama series in television history! So what series was number 1? Why Dallas, of course!