CBS
Added to the database on September 8, 1997
Rate
(17 votes)
Cast & Characters | Broadcast History | Theme Song | DVDs | Watch Episodes | Photos | Trivia | Comments
Gilligan's Island is a sitcom that aired on CBS from 1964 to 1967 about seven castaways that were stranded on a deserted island. 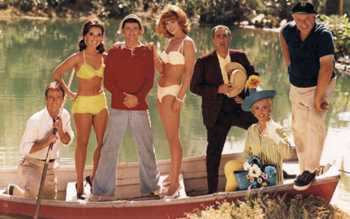 The expository theme song is one of television's most quoted, and its characters--the Skipper, first mate Gilligan, the millionaire and his wife, a movie star, "and the rest" as the Professor and Mary Ann are pop culture icons. Gilligan's Island centered around a this group who were stranded on an uncharted deserted island somewhere in the Pacific Ocean. They all were on a boat tour, which found itself in the middle of a storm leading them to crash on an island! Gilligan was the first mate on the boat, the SS Minnow. Most episodes dealt with the castaways trying to get off the island, but their attempts seemed to always be foiled by Gilligan. That, and the unending debate: Ginger or Mary Ann?

"The Ballad of Gilligan's Isle"
by George Wyle and Sherwood Schwartz

Just sit right back and you'll hear a tale,
A tale of a fateful trip
That started from this tropic port
Aboard this tiny ship.
The mate was a mighty sailing man,
The skipper brave and sure.
Five passengers set sail that day
For a three hour tour, a three hour tour.
The weather started getting rough,
The tiny ship was tossed,
If not for the courage of the fearless crew
The minnow would be lost, the minnow would be lost.
The ship set ground on the shore of this uncharted desert isle
With Gilligan
The Skipper too,
The millionaire and his wife,
The movie star
The professor and Mary Ann,
Here on Gilligans Isle.
So this is the tale of the castways,
They're here for a long, long time,
They'll have to make the best of things,
It's an uphill climb.
The first mate and the Skipper too,
Will do their very best,
To make the others comfortable,
In the tropic island nest.
No phone, no lights no motor cars,
Not a single luxury,
Like Robinson Crusoe,
As primitive as can be.
So join us here each week my friends,
You're sure to get a smile,
From seven stranded castways,
Here on "Gilligan's Isle."

The theme song for Gilligan's Island refers to Mr. Howell as a Millionaire, but in several episodes he's referred to as a Billionaire.

Bob Denver (Gilligan) was cast in a major role on another TV show 5 years before Gilligan's Island. He played the part of Maynard Krebs in "The Many Loves of Dobie Gillis".

Gilligan was the only character that never had his full name mentioned on the TV show. Some of the people associated with Gilligan's Island say his first name was supposed to be "Willy" but Bob Denver insists that he always believed that Gilligan was his first name!