All In The Family

CBS
Added to the database on September 10, 2008
Rate
(33 votes)
Cast & Characters | Broadcast History | Theme Song | DVDs | Watch Episodes | Photos | Trivia | Comments
All in the Family is a sitcom that aired on CBS from 1971, to 1979. In September 1979, a new show, Archie Bunker's Place, picked up where All in the Family had ended. This sitcom lasted another four years, ending its run in 1983. 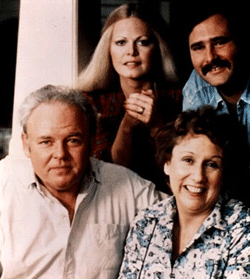 Boy, the way the Beaver played. Ricky Nelson made the hit parade. Voices they were seldom raised. Those were the days. And then, on January 12, 1971, America met the Bunkers, and sitcoms would never be the same. The Bunkers were TV's first dysfunctional family: blue-collar bigot Archie (the late Carroll O'Connor in his iconic role), his long-suffering but loving wife Edith (Jean Stapleton), "little goil" Gloria (Sally Struthers), and her liberal husband "Meathead" Mike (Rob Reiner). Series creator Norman Lear broke near every rule and taboo in adapting the British series "Till Death Do Us Part" for American television. The series pilot, "Meet the Bunkers," was a bracing shocker that dared to find humor in prejudice. Archie dispenses racial epithets and ethnic slurs. Mike and Gloria clearly have an active sex life, while Edith, in the pilot at any rate, is more "pip" than "dingbat." In its first season, the series refused to, in Archie's words, "stifle" itself, tackling such hot-button topics as homophobia ("Judging Books by Covers"), racism ("Lionel Moves into the Neighborhood"), feminism ("Gloria Discovers Women's Lib"), and the generation gap (the touching "Success Story," with William Windom as Archie's former army buddy, a successful man who is revealed to be estranged from his son).

"Those Were the Days," by Strouse and Adams, sung at the opening of each show by Archie and Edith

Boy the way Glen Miller played
Songs that made the hit parade.
Guys like us we had it made,
Those were the days.
And you knew who you were then,
Girls were girls and men were men,
Mister we could use a man
Like Herbert Hoover again.
Didn't need no welfare state,
Everybody pulled his weight.
Gee our old LaSalle ran great.
Those were the days.

All In The Family On DVD

All In The Family Photo Gallery

All In The Family Trivia

The All in the Family TV show won an amazing number of awards during its nine seasons on the air including eight Golden Globes and twenty-two Emmys!

All in the Family was the first TV series that allowed their viewers to hear a toilet flushing.

Angela Lansbury is probably thankful to Jean Stapleton for turning down the part of Jessica Fletcher on "Murder, She Wrote". Jean was offered the role first but Angela turned it into a twelve season, 264 episode extravaganza!

The creator/executive producer of All in the Family was Norman Lear. Norman based the Archie Bunker character on his father who was was reportedly every bit as big a bigot as Archie and gave Norman a hard time just like Archie's treatment of his son-in-law on the show. Norman's father once called his son, "the laziest white kid I ever knew". Obviously, today we know that was way off base and the "white kid" portion of the remark pretty much makes the bigotry clear. In addition to All in the Family, Lear also produced several other series including "Hot L Baltimore", "All in the Family", "The Jeffersons", "Maude", "Mary Hartman, Mary Hartman", and "One Day at a Time". Lear flew more than 50 missions on a Boeing B17 Bomber over Italy as a radio operator in World War II! He even was awarded an Air Medal with four oak leaf clusters! His first showbiz job was in 1951 as a writer on the "Ford Star Review" TV show!

Rob Reiner's dad is TV's legendary Carl Reiner. Carl was one of the stars on one of television's first comedy series, "Your Show of Shows". Carl is probably best known, however, as Alan Brady on the Dick Van Dyke Show. Carl appeared on nearly every comedy variety series from the 1950s through the 1970s including "The Ed Sullivan Show", "The Donnie and Marie Show", "The Judy Garland Show", "Rowan and Martin's Laugh-In", "The Smothers Brothers Comedy Hour", and many others.

If you visit Washington, D.C., don't forget to visit the Smithsonian Institute. You might want to take a look at Archie and Edith Bunker's easy chairs while you're there!

Carroll O'Connor did not appear in episodes #93, "Where's Archie? - Part 1" and #94, "Archie Is Missing - Part 2". He was holding out for more money during contract negotiations and refused to come to the tapings. The producers finally told him that if he didn't show for the next episode, they'd write a script where Edith would find his body after being murdered! Apparently, they managed to work things out because that episode didn't happen.

All in the Family was the inspiration for four spin-off series. They were, "Gloria", "Maude", "The Jeffersons", and "Archie Bunker's Place". "Maude" had its own spin-off ... "Good Times" and "The Jeffersons" spunoff "Checking In".

One of Rob Reiner's best friends is Billy Crystal who he met while Billy was guest-starring on the All In the Family TV show. Ironically, both Rob and Billy were born in New York City on the same day and their times of birth were within minutes of each other!