NBC
Added to the database on August 19, 2009
Rate
(21 votes)
Cast & Characters | Broadcast History | Theme Song | DVDs | Watch Episodes | Photos | Trivia | Comments
Bonanza is a western TV series that aired on NBC from 1959 to 1973. Lasting 14 seasons and 430 episodes, it ranks as the second longest running western series (behind Gunsmoke) and still continues to air in syndication.
The Cartwright's thousand-square-mile Ponderosa Ranch is located near Virginia City, Nevada, site of the Comstock Silver Lode, during and after the Civil War. Each of the sons was born to a different wife of Ben's; with none of the mothers still alive. Join Ben (Lorne Greene), Adam (Pernell Roberts), Hoss (Dan Blocker) and Little Joe (Michael Landon) as they rewrite the book on the western genre. These were the days where family values and the fight for justice were backed up by six-guns that always had right on their side. 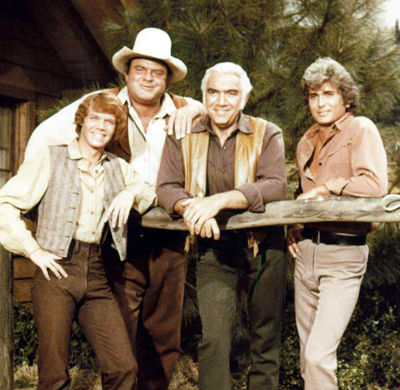 
View all Bonanza DVDs, books, merchandise and collectibles from Amazon.com

At first, NBC wanted established stars for the cast of Bonanza. The producer of Bonanza, David Dortort, was the first to understand that this "new" medium of television would create its own stars. The TV show was not an immediate success. A lousy time slot on Saturday evenings sure didn't help. The only thing that actually kept the show alive for the first two years was that it was one of the few series shown in Color. RCA owned NBC and wanted Bonanza's beautiful colorful vistas to sell their new line of color televisions. When the show was moved to Sunday nights, its ratings improved dramatically.

Each of Ben Cartwright's sons had a different mother. All of Ben's former wives had died. Female family members were a definite "taboo" on the series. The successful theme of the show, after all, was the strong widower raising his sons as a single parent. In keeping with that theme, the sons female relationships were doomed to failure. Anytime one of them started developing a love interest, you could be sure they'd either die soon or they'd do something so terrible that the son in question could "dump" them without being seen as a "cad" or they'd have some good reason why they simply had to leave the area. So many love interests died that Michael Landon once said that the Cartwrights had to be careful or their horses would trip over the graves of one of the past female characters.

Pernell Roberts eventually became disatisfied with the scope of his role on Bonanza. One of the things producers tried to keep him happy was to give him a wife. A young widow named Laura Dayton was introduced and Adam Carwright courted her. They soon became engaged. The producers were overwhelmed with protests from (mostly) female fans and they dropped any further ideas of any Cartwright marriages! Pernell later got his own TV series, "Trapper John, M.D. (1979)" where he played the role of one of the doctors from the series, "M*A*S*H (1972) after that character returned to the U.S. from serving in the Korean War.

Bonanza was the most globally broadcast show ever. It was aired in every nation on Earth that had a single TV station!

Before Bonanza, Lorne Greene was a popular personality on several radio programs in his native Canada. He was actually known as "The Voice Of Canada". After Bonanza, he went on to star in two more series, "Battlestar Galactica (1978)" and "Code Red (1981)". He also made numerous appearances as a guest star on other series.

After a dozen years on the air, Bonanza started dropping in the ratings. When Dan Blocker, the lovable "Hoss" died in 1972, it pretty much killed the show.