Added to the database on March 2, 2009
Rate
(3 votes)
When The Huckleberry Hound Show debuted in syndication on October 2, 1958, it launched the Hanna-Barbera empire--and radically changed the course of American animation.
After MGM closed its cartoon studio in 1957, Bill Hanna and Joe Barbera, the Oscar-winning directors of the "Tom and Jerry" shorts, started their own company. Their first cartoon series, Ruff and Reddy was used in a package show that included a live host, puppets, and old theatrical shorts. Hanna and Barbera realized that to succeed in television animation, they needed programs that were entirely their own, and The Huckleberry Hound Show was their first. Huck, who hosted the series, was an amiable, none-too-bright turquoise dog. No matter what ridiculous situation he stumbled into, his genial, good nature enabled him to come out on top, singing "Clementine" in his off-key Southern drawl. 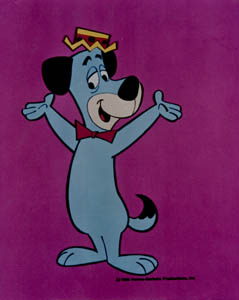