ABC
Added to the database on March 20, 1997
Rate
(27 votes)
Cast & Characters | Broadcast History | Theme Song | DVDs | Watch Episodes | Photos | Trivia | Comments
The Wonder Years was a hit comedy-drama series that aired on ABC from 1988 until 1993 that starred Fred Savage as Kevin Arnold, a boy facing rites of passage on his way to adulthood . 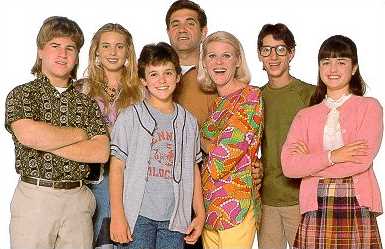 Kevin lives with his brother Wayne (Jason Hervey), his sister Karen (Olivia d'Abo), his father Jack (Dan Lauria), and his mother Norma (Alley Mills). Kevin grows up with his on-and-off girlfriend, Winnie Cooper (Danica McKellar), and his best friend, Paul Pfeiffer (Josh Saviano). Story lines are told through Kevin's reflections as an adult in his mid-30s, voiced by narrator Daniel Stern. The series depicts the social and family life of a boy in a typical American suburb from 1968 to 1973, covering his ages of 12 through 17. Each year in the series is presented as having taken place 20 years before the original air dates (1988 to 1993).

The show achieved a spot in the Nielsen Top Thirty for four of its six seasons. TV Guide named the show one of the 20 best of the 1980s. After only six episodes aired, The Wonder Years won an Emmy for best comedy series in 1988. In addition, at age 13, Fred Savage became the youngest actor ever nominated as Outstanding Lead Actor for a Comedy Series. The show was also awarded a Peabody Award in 1989, for achieving two seemingly contradictory effects: evoking a traditional family sitcom while pushing boundaries and using new modes of storytelling. In total, the series won 22 awards and received another 54 nominations for various awards. In 1997, "My Father's Office" was ranked #29 on TV Guide's 100 Greatest Episodes of All Time.

"With A Little Help From My Friends"
Written by The Beatles and sung by Joe Cocker.

Buy The Wonder Years On DVD

This show is currently not available to stream online.

There are currently no items for purchase.

Poor Jason Harvey's character (Wayne Arnold) was so hated that one time in a bar a guy came up to him and said, "I had a brother just like you" and then punched him in the face! Fans generally didn't like him and obviously couldn't separate him in real life from his character on the Wonder Years!

Probably the two biggest goofs made in filming Wonder Years both concerned school and space flight. On episode #5, "The Phone Call" Kevin fakes being ill so he can stay home from school. He states that later in the evening Apollo 8 will be going into orbit around the moon. That actually happened on Christmas Eve in 1968. There's no school on that day. Then in episode #41, "Faith", Kevin comes home from school to watch Apollo 13 lift off. That happened on Saturday, April 11, 1970. There is no school on Saturday.

Fred Savage began his acting career at age 4 in the movie, "Dinosaur (1980)". He directed an episode of "Boy Meets World (1993)" in 1998. His younger brother Ben Savage stars in that series. Fred graduated from Stanford University with a degree in English in 1999.

Kevin's dog was named "Buster". His grandfather gave him the dog.

You might think of Danica McKellar as the cute little girl "Winnie" on the Wonder Years TV show. In real life, she went on to graduate Summa Cum Laude from UCLA with a degree in mathematics. She also co-wrote a paper in 1998 that was published in Britain's "Journal of Physics" which mathematically proved a theorem of magnetism in two dimensions (Whatever that means)! She also speaks fluent French! And while Danica did get her first regular role on the Wonder Years at barely 13 years of age, she had already appeared on a couple of episodes of, "The Twilight Zone (1985)" and before that, in a few TV commercials.

The influence of the Vietnam war was often felt on the Wonder Years TV show. Winnie found out her older brother Brian had been killed there in the very first episode. Dan Lauria (Jack Arnold) actually served a tour in Vietnam in real life as a Marine Corps Captain!

Karen got married in 1992. Her husband Michael was played by David Schwimmer. A couple of years later, he would get the part of Ross Geller on "Friends (1994)".

Kevin once dated a girl named Becky Slater. After they stopped seeing each other, she decided to become Kevin's worst nightmare! Becky was portrayed by Crystal McKellar, Danica McKellar's (Winnie) real-life sister!

Wonder Years, like all shows, had some mistakes that "got past" the editors. In Episode #19, "Birthday Boy", Paul's bar mitzvah celebration is said to be on Saturday, March 18, 1969. That day actually fell on a Tuesday. In episode #34, "Don't You Know Anything About Women?", Kevin walks into the lunchroom and looks at Susan Fisher. When the shot changes from him to Susan, it's obvious that he is at the table behind her (you can't see his face but his body shape and the same shirt he's wearing in other scenes is unmistakeable). Then, in the next scene, he's back at the entryway leading to the lunch room again (and it's clear he hasn't entered yet).

On the final episode of the Wonder Years TV show, the viewers got a look at what would be happening to the Arnold family and their friends in the future. Kevin and his father had a "falling-out" but reconciled before Jack Arnold died (Only 2 years after the events at the end of the series). Wayne took over the family business. Karen gave birth to a baby boy. Paul Pfeiffer went to Harvard and got a law degree. Winnie travelled to Paris to study art. Kevin married (no, not Winnie) and had a son.
Tagged under:
Viewed 63179 times Last modified on March 19, 2017
back to top
« WKRP In Cincinnati