ABC
Added to the database on October 30, 2008
Rate
(22 votes)
Cast & Characters | Broadcast History | Theme Song | DVDs | Watch Episodes | Photos | Trivia | Comments
The Love Boat is sitcom set on a cruise ship that aired on ABC from 1977 until 1986. The show starred Gavin MacLeod as the ship's captain. It was part of ABC's popular Saturday night lineup that included Fantasy Island until the latter show ended in 1984.
Set aboard the Pacific Princess, a luxury cruise ship which embarked each week on a romantic, sentimental, and often hilarious voyage across tropic seas. Three or four stories told on each telecast were interwoven and often involved the ship's crew, who were seen on the show every week. Famous movie and TV stars were delighted to accept guest roles on The Love Boat's floating sound stage, combining work with travel to exotic locations. Most of the episodes were filmed on two real cruise ships, the Pacific Princess and the Island Princess, during their regular voyages from the Virgin Islands to Alaska. Paying passengers were invited to participate as extras. 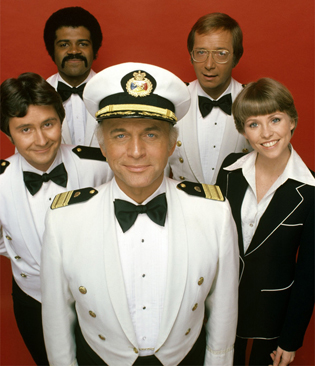 The Love Boat on DVD

This series was based upon Jeraldine Saunders' novel titled, "The Love Boats". She wrote the book from her personal observations while serving as a hostess on a cruise ship.

The Love Boat was actually filmed on two ships. In addition to the "Pacific Princess", filming was also done on the "Island Princess" although that name was never used on the series.

Filming took place while on actual voyages ranging from the Virgin Islands to Alaska. Those cruises were always booked solid very far in advance! Passengers not only found it exciting to watch a TV show in production, they were also eligible to appear on the series as "extras"!

In order to maintain interest in the show, in 1981 the Love Boat travelled to canceled, in 1982 to the Mediternanean and to China in 1983!

A musical segment was also added in 1982 called the "Love Boat Follies" where the regular and guest cast would sing and sometimes dance.

More changes were made in the fall of 1985 in an attempt to stop the slowly worsening ratings. The theme song sung by Jack Jones was changed to a "hipper" version sung by Dionne Warwick. A group called the "Love Boat Mermaids" were added to perform a musical number each week. (One of them was Teri Hatcher ... Who would later star on "Lois and Clark" and "Desperate Housewives"). A casino was added to the ship. Airtime was also moved from 9:00 to 10:00 PM. Those changes didn't help. By the spring of 1986, a final attempt to save the show was made by giving Captain Stubing a love interest and eventually having him marry.

It was sad for hardcore viewers when the series ended in 1986 but that wasn't the last time we saw the crew of the Pacific Princess. In addition to a number of TV specials the following season and a TV reunion movie in 1990, they also got together on October 30, 1998 for Vicki's Wedding on episode #10 of "Love Boat: The Next Wave"! Julie and Doc were also pretty "Lovey-Dovey" on that episode. Only Fred Grandy did not appear. He had become a politician by that time and was trying diligently to lose his "Gopher" image!