CBS
Added to the database on March 3, 2009
Rate
(26 votes)
Cast & Characters | Broadcast History | Theme Song | DVDs | Watch Episodes | Photos | Trivia | Comments
The Honeymooners is a sitcom that starred Jackie Gleason as Ralph Kramden and centered Ralph's trials and tribulations of trying to better his life and family.
328 Chauncey Street, Bensonhurst, Brooklyn, New York is where the apartment residences of the Kramdens and the Nortons stand. These four people, fifteen years after the depression are still struggling to make ends meet. Ralph Kramden and Alice Gibson married following his acquiring employment as a bus driver with the Gotham Bus Company. Edward Lillywhite Norton, a sewer worker, and his wife, Thelma 'Trixie', live above the Kramdens. The stories depict the sincere attempts of two men attempting to better their lives, and the ensuing frustrations when their schemes to strike it rich inevitably backfire. Although "The Honeymooners" is one of the best remembered comedy highlights of TV's golden age, it was seen for most of its history as a segment within other programs. 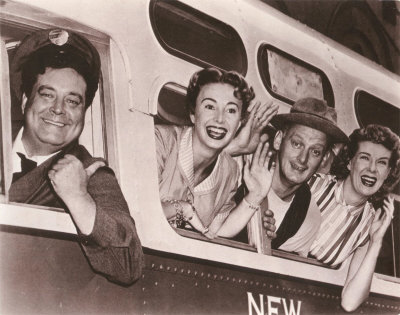 The Honeymooners on DVD

Jackie Gleason and Art Carney were first cast together on "The Cavalcade of Stars" program. Art's character "Ed Norton" was introduced on that series.

According to Jackie Gleason, Orson Welles was the first person to call him, "The Great One".

Jackie Gleason did not originally want Audrey Meadows to be cast for the part of Alice Kramden. He thought she was too young and too pretty. She sent him pictures of herself dressed as a poor housewife and he changed his mind.

In 1956, Art Carney won an emmy for the Honeymooners TV show as best actor in a supporting role. Jackie Gleason and Audrey Meadows both earned emmy nominations that year too but did not win.

You know how you're always hearing that some series is filmed in the same studio where the "Ed Sullivan Show" was done. Well, The Honeymooners episodes were done there first!

Jackie Gleason was born in a poor part of Brooklyn, NY pretty similar to his home on the Honeymooners.

The often heard of Honeymooners' "Lost Episodes" are actually the sketches of the Honeymooners that were performed on the Jackie Gleason Program. They were in Gleason's possession all those years (30) and he always knew where they were. He had copies because it was in his contract that he would receive copies of all shows.

The inscription on Jackie Gleason's headstone is his trademark phrase, "And Away We Go!".

Everyone knows that Jackie Gleason starred in the movie, "The Hustler" in the role of "Minnesota Fats". Many people know that Jackie did not use a "double" for the pool shots as he was an excellent pool player himself. Few people are aware, however, that he got his skill by actually working as a pool hustler in his younger days!