I Dream Of Jeannie

NBC
Added to the database on November 27, 1997
Rate
(17 votes)
Cast & Characters | Broadcast History | Theme Song | DVDs | Watch Episodes | Photos | Trivia | Comments
I Dream of Jeannie is a 1960s sitcom that aired on NBC from 1965 to 1970 and starred Barbara Eden as a 2,000-year-old genie, and Larry Hagman as an astronaut who becomes her master, with whom she falls in love and eventually marries. 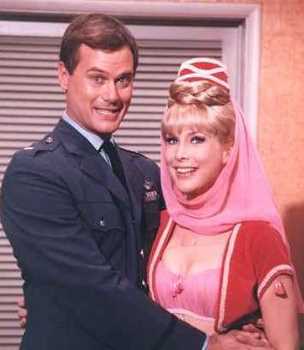 Oh, the innocent days when the sexiest thing on television was Barbara Eden's hidden navel! In the classic 1960s sitcom I Dream of Jeannie, an astronaut stranded on a desert island discovered a bottle containing a genie--a shapely blond genie in scarves and diaphanous pantaloons! He sets her free, but she follows him back to Cocoa Beach, Florida, where her efforts to serve him only cause mischief and threaten his career in the space program. I Dream of Jeannie depicted the male fantasy of a beautiful but subservient girl--but this subservient girl was all-powerful and oddly willful in her attempts to serve. It all worked because of the leads: Barbara Eden and Larry Hagman went on to lengthy careers (later starring in Harper Valley PTA and Dallas, respectively), but arguably never matched the chemistry they had as Jeannie and Captain (soon to be Major) Tony Nelson. Jeannie, though naive and eager to please, always had Eden's intelligence and steely resolve lurking under her bubbly blonde surface, while Hagman projected a genuine decency that somehow made the potentially salacious situation seem innocent.

Still, the show would never have been more than a knockoff of the similar Bewitched (basically, the battle of the sexes with a magic twist) if Tony's secret hadn't been discovered midseason by his best friend, fellow astronaut Roger (the wonderful Bill Daily, later on The Bob Newhart Show). Unburdened by the need for decency, Roger could be the show's insatiable id, eager to use Jeannie for no end of self-serving purposes. Meanwhile, psychiatrist Dr. Bellows (Hayden Rorke) served as the show's perpetually flabbergasted superego, constantly demanding a rational explanation for all the madcap events around him. All at once the show's storylines--which had previously been dominated by Jeannie's desire for marriage--could wander in any daffy direction the writers chose. The result was deeply silly and utterly charming.

Buy I Dream Of Jeannie on DVD

The I Dream Of Jeannie Shop

I Dream of Jeannie Photo Gallery

I Dream of Jeannie Trivia

Jeannie's bottle was made from a Jim Beam liquor decanter which was simply painted with gold leaf.

Several performers played themselves on the TV show. Some of them were Groucho Marx (You Bet Your Life), Sammy Davis Jr., Milton Berle, Don Ho, & Judy Carne and Arte Johnson of Rowan & Martin's Laugh-In.

Although they were both Astronauts, Anthony Nelson was in the Air Force and Roger Healey was in the Army.