Head Of The Class

ABC
Added to the database on October 3, 2008
Rate
(29 votes)
Cast & Characters | Broadcast History | Theme Song | DVDs | Watch Episodes | Photos | Trivia | Comments
Head of the Class is a sitcom aired on ABC from 1986 to 1991 that follows a group of gifted students in the Individualized Honors Program (IHP) at the fictional Monroe High School (later Millard Fillmore High School) in Manhattan, and their history teacher Charlie Moore (Howard Hesseman). The program was ostensibly a vehicle for Hesseman, best known for his role as radio DJ Dr. Johnny Fever in the sitcom WKRP in Cincinnati. Hesseman left Head of the Class in 1990 and was replaced by Billy Connolly as teacher Billy MacGregor for the final season.
This popular situation comedy was the flip side of Welcome Back, Kotter. Instead of underachieving "sweathogs," its focus was on the over achieving honor students at Manhattan's Milliard Fillmore High School. They were so brainy, in fact, that most of their former teachers had just read books while they taught themselves. Enter substitute teacher Charlie Moore, who realized that while these kids were long on facts, they were painfully short on maturity, and could use a few lessons from "the Book of Life" before they faced the real world. 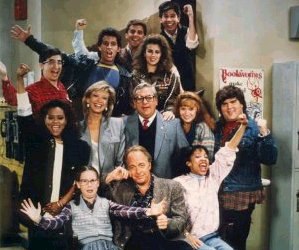 Dr. Samuels was the principal, wary of Charlie's disruption of academic routine but generally supportive; and Bernadette, the energetic assistant principal. The class included Arvid, the classic nerd with glasses, pocket slide rule, and polyester pants; Maria, so driven that when she got a "B" she grounded herself; Simone, the poet; Jawaharlal, the word-mangling exchange student; Eric, the "cool dude" who hated being so smart that he was put with the geeks; Janice, a 12-year-old genius who hadn't had time to grow up; Alan the proto-yuppie; Darlene, the uptown rich girl; and Dennis, the chunky chemistry whiz who loved pizza.

Turnover in the cast was gradual, and many of these fast-track students stayed in class the full five-year run. Oddly, Mr. Moore left before they did, moving on in 1990 to pursue his dream of an acting career. He was replaced by free-spirited Scotsman Billy MacGregor. Another addition was T.J., a remedial-ed "probelm student," whose slow learning had more to do with attitude than intelligence

Head of the Class Trivia

The setting for the Head of the Class TV show was at the affluent Monroe High School in Manhattan. In the final season of the series, the name of the school was changed to Millard Filmore High and it was scheduled to be torn down!

While some news programs and TV specials like "Candid Camera" had been filmed in Moscow, Russia; the Head of the Class TV show was the first regular entertainment series to do so in episodes #47 and #48; "Mission to Moscow - Parts 1 and 2".

Those who enjoyed the musical numbers by the cast of "That 70s Show" would also have liked a couple of musical extravaganzas that took place on two more two-part episodes of Head of the Class. On episodes #57 and #58, "Little Shop 'Til You Drop - Parts 1 and 2", the entire class of nerds performed a scene fro "The Little Shop of Horrors". On episodes #83 and #84, "From Hair to Eternity - Parts 1 and 2", they performed a scene from "Hair".

Head of the Class got a great start during its first season due to its 8:30PM time slot on Wednesday evenings. It's only real competition was the last half on "Highway to Heaven" on NBC which didn't challenge Head of the Class for potential sitcom viewers. CBS was airing the series, "Better Days" which only survived a few episodes. Head of the Class also followed the hit comedy series, "Perfect Strangers" so it had a "built in" comedy audience.

Howard Hesseman left the series at the end of the fourth season. The disappearance of Mr. Moore was explained by saying that he had left to attempt a career in acting. That had been his life-long dream. Moore was replaced by a new teacher, an exuberant man from Scotland named Billy MacGregor who was portrayed by comic Billy Connolly.

Billy Connolly may have only had one season on the Head of the Class TV show but there was another payoff for him. The series generated a "spinoff series" based on his character on Head of the Class! Since Millard Fillmore High was being torn down, Billy MacGregor needed to find a new teaching job so he moved from Manhattan to California to accept an offer. The series title was simply, "Billy" and it, unfortunately, only survived 13 episodes.

In the final two episodes of the Head of the Class TV show, "It Couldn't Last Forever - Parts 1 and 2", the no longer quite as nerdy class of students all graduated from high school!